Over 10.3 million hectares have been burnt and over 1 billion animals have died. We have launched an urgent appeal to restore as much rainforest as possible so that our wildlife has the habitat they need to survive. In response to the most frequently asked we’ve provided answers here. 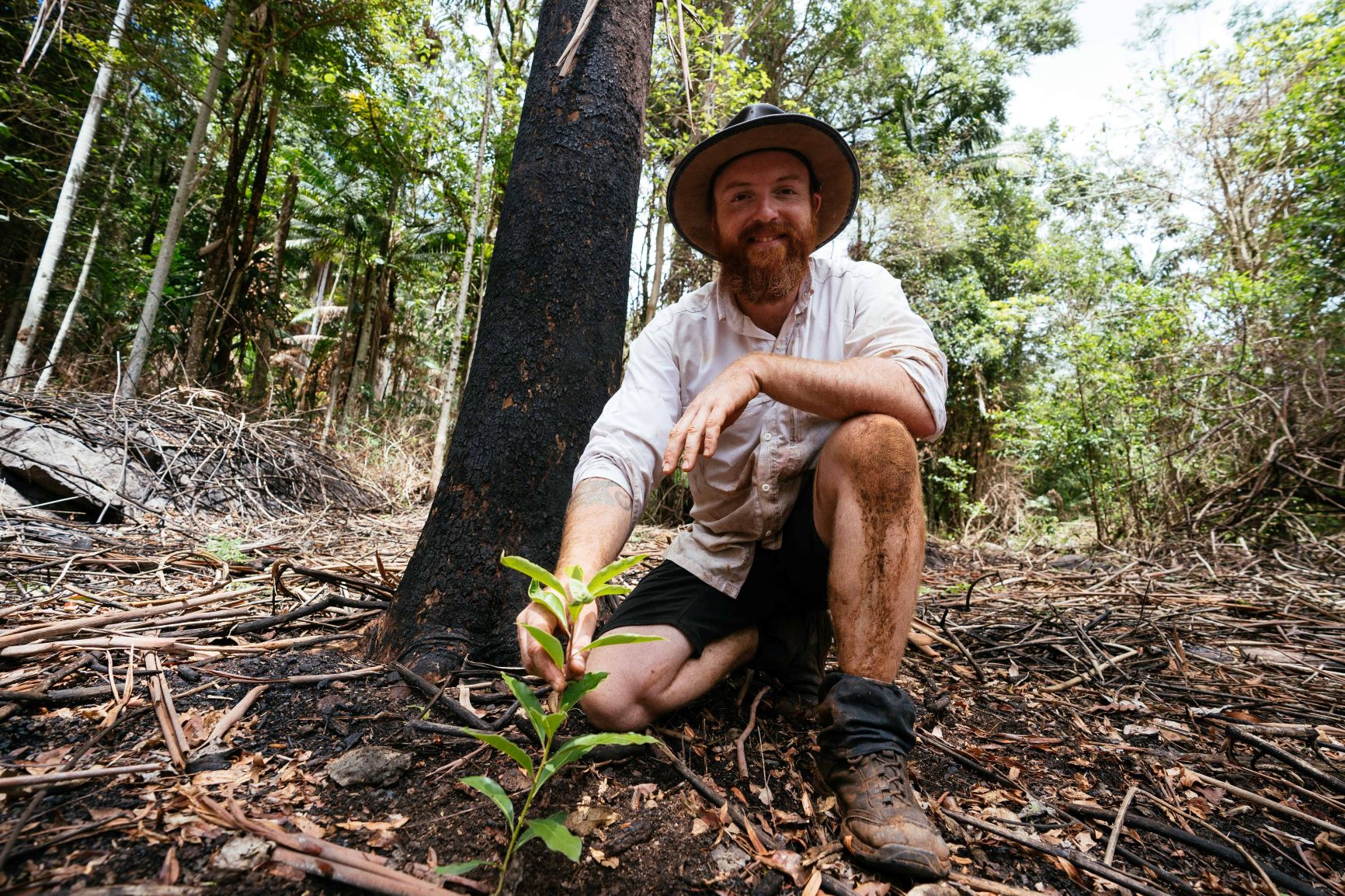 Michael is ready to plant thousands of trees to restore the rainforest.

Where and when did the bushfires occur in Northern NSW?

Unprecedented bushfires occurred in Northern NSW inland from Byron Bay in November and December 2019. They started on the 8th of November and were named the Mt Nardi fires. It’s believed the initial ignition was from a lightning strike that occurred at the beginning of October. According to RFS Superintendent Bryan Daley, the "Rainforest was burning", due to unprecedented fire conditions. Most of the bushland burnt was sclerophyll forest (eucalyptus, acacias and other hard leaved plants), however, the extreme conditions allowed the fire to burn the edge of the rainforest and in some place’s rainforest itself. These fires impacted Terania Creek, Tuntable Creek, Tuntable Falls, Huonbrook, Upper Coopers Creek, Upper Wilsons Creek and surrounds and burnt over 5,500 hectares.

Have the fires been extinguished?

The efforts of the RFS (Rural Fire Service) and several rainfall event of about 30 mm in December brought the fires in Northern NSW known as the Mt Nardi fires under control. Significant rain in mid-January of 150-200 mm ensured they were extinguished. In southeast Australia, South Australia and Western Australia the threat from fires will remain high over the summer.

Won’t the forests recover by themselves?

In Australia many ecosystems have evolved with fire and eucalypts, banksias and acacias will regenerate naturally and rapidly after fire events. Rainforests are ecosystems that are poorly adapted to fires and as 99% of lowland subtropical rainforest has been cleared in the past, they need help to recover. We will be planting in areas where natural regeneration is not likely.

Where are you planting the trees?

The trees will be planted on an established rainforest restoration site at Upper Wilsons Creek (where the photos on the pager were taken). This project is restoring Lowland Subtropical Rainforest (of which only 1% remains) which in New South Wales is an Endangered Ecological Community (NSW Biodiversity Act, 2016). For that reason, we will also plant trees on land nearby where rainforest restoration to recreate habitat is urgently needed.

Who will plant the trees?

We are implementing this project with our partners at Reforest Now. They are a nonprofit organisation based in the Byron Shire in Northern NSW. They have a rainforest plant nursery and a team of workers who prepare sites for planting. This involves using equipment to auger thousands of holes and is very physical work. We will organise community tree planting events in the coming weeks and months where volunteers of all ages can participate safely.

How long will it take to plant the trees?

Now that the bushfires in Northern NSW burnt have been extinguished and rain has come we are ready for recovery actions. In this subtropical climate, we have a wet season that has arrived so it’s now the ideal time to plant rainforest trees. Our established restoration sites are ready for planting rainforest trees to re-establish habitat for endangered wildlife. We are planting trees now and will continue the largescale planting during the wet season which runs until May 2020. After that, if some planting is still required it will occur when conditions are suitable.

Why is restoring our rainforests important? Rainforests provide a vital refuge for plants and animals especially when fires occur. Rainforests are less likely to burn than eucalyptus forests. Planting rainforest trees is one essential solution to protect Wildlife, Climate, People and the Planet.

We need to raise $1 million to plant 100,000 rainforest trees. We are ready to start immediately. A $10 donation will plant and care for your tree for three years to ensure survival.

Caring for our future. Restoring rainforest will sequester carbon from the atmosphere to help mitigate Climate Change preventing future escalations of bushfires. Biosequestration is a tool we can use to drawdown carbon from the atmosphere. It makes a contribution to reversing climate change, and eventually reducing global average temperatures. Planting rainforest trees is one of the most effective ways we can reverse Climate Change.

How will the donated funds be used?

Funds donated will be used to plant trees to restore the subtropical rainforests in Northern NSW. This includes the cost of propagating and growing the trees in the nursery, site preparation, planting and maintenance of the trees for three years to ensure they all survive.

What species of wildlife will benefit from the project?

The Wompoo Fruit-dove and Rose-crowned Fruit-dove are some of the 25 threatened species that will be helped through this project.

The 25 species recorded in Wilson Creek, that are listed as Threatened by the New South Wales government’s Biodiversity Conservation Act include;