Endangered Fan Palm Forest on Lot 305 must be saved

Fan Palm forest is one of Australia’s most beautiful landscapes and, in a land, where bushfires and all too common they provide a welcome oasis for the mind. They are also one of our most endangered ecosystems which has given us extra motivations to purchase and protect Lot 305 Cypress Road in the Daintree Lowland Rainforest. 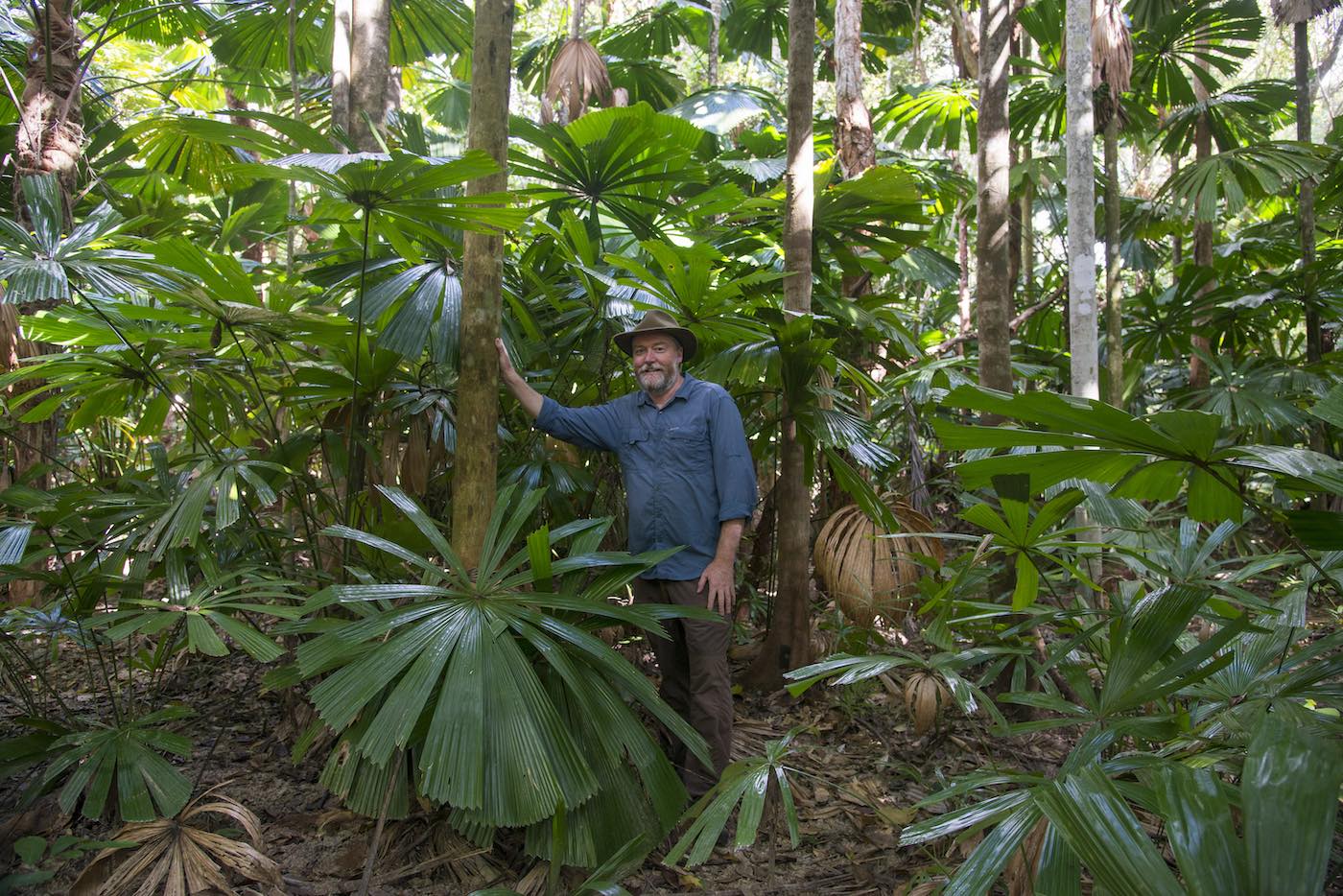 Prior to making a commitment to purchase of Lot 305 Cypress Road in Cow Bay we wanted to be reassured of its conservation values.

A vegetation survey was undertaken of Lot 305 Cypress Road, Cow Bay on the 2nd of September 2019 by ecologist and botanist Kristopher Kupsch. He found the vegetation to be remnant (not regrowth or disturbed) with a well development intact assemblage of 145 native species.

The vegetation Regional Ecosystem (RE) mapping by The Department of Environment and Science, Queensland Herbarium is mostly consistent with the site appraisal and much of the vegetation on Lot 305 is Fan Palm dominated tropical rainforest. This is classified as closed forest RE 7.3.7. and the Queensland Government have listed this vegetation type as “Endangered” under the Vegetation Management Act 1999. The Queensland government indicates “very little of this habitat (RE 7.3.7) remains” with an estimated 9,000 hectares prior to clearing and 1,000 hectares remaining in 2017. This Fan Palm dominated vegetation type solely occurs between Cardwell and Cape Tribulation and what remains, less than half is within reserves. 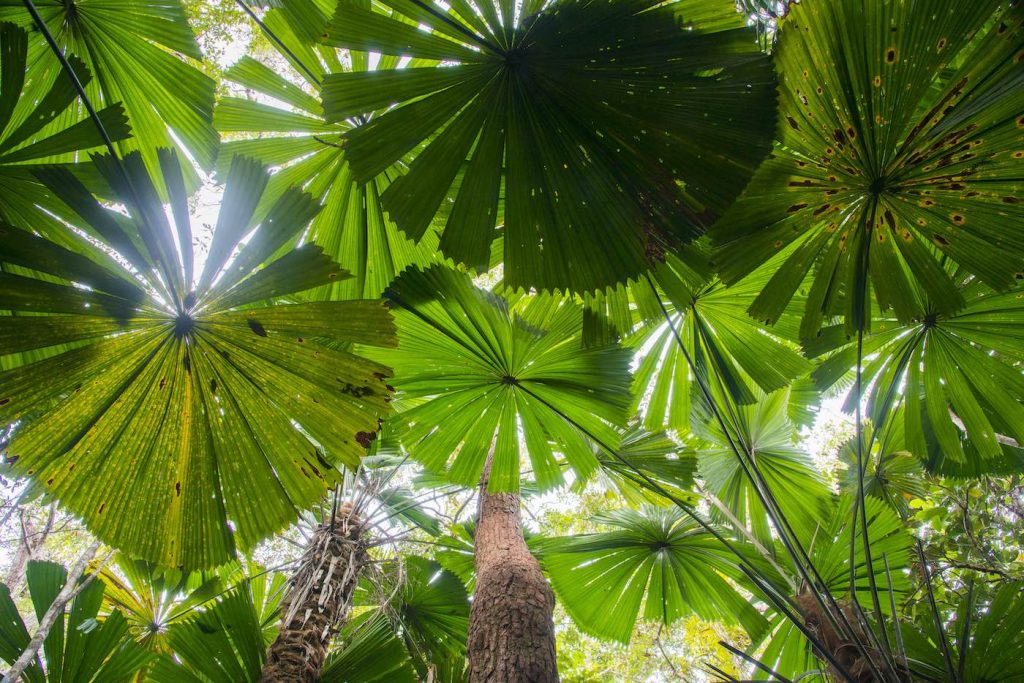 These beautiful Fan Palms must be saved!

Kristopher commented “The conservation status of this ecosystem is further compounded by the presence of very large Eucalyptus pellita trees in the canopy with an absence of younger specimens. This indicates ecological succession in the absence of fire. Historically this habitat would have been subjected to routine fire events be they anthropogenic or weather induced. Overtime the habitat has been “invaded” by rainforest plants including the Fan Palms which now dominate the undergrowth, effectively precluding light, halting fires and eliminating any sclerophyll vegetation from recruiting”.

The southern edge of Lot 305 has open forest RE 7.3.5 which is listed as “Least Concern” under the Vegetation Management Act 1999. This forest type is characterised by the presence of Swamp Paperbark (Melaleuca quinquenervia), a species of Paperbark more commonly seen in the subtropical regions. This forest also has Hydriastele Palms (Hydriastele wendlandiana), Gardenias (Atractocarpus fitzalanii and A. sessilis) and Red Beach (Dillenia alata). The forest is poorly drained on alluvial plains with an undergrowth of sedges, especially Gahnia and Scleria. For much of the year the watertable is at or above the surface. There is an abundance of epiphytes within this ecosystem, notably Orchids and Ant Plants.

Kristopher observed several plants on Lot 305 Cypress Road that were endemic or Threatened species or otherwise of conservation significance.

The “Vulnerable” Climbing Pandanus (Freycinetia percostata) is abundant in the illuminated habitat of RE 7.3.5. It is restricted mainly to the Daintree lowlands and again on Cape York at Iron Range and overseas in Papua New Guinea. This climbing monocotyledon plant possesses unique leaves which the bases catch water and thus provide habitat for arboreal invertebrates and frogs. These habitats are termed Phytotelms.

The “Vulnerable” Ant Plant (Myrmecodia beccarii) occurs within the canopy trees of RE 7.3.5. It is fairly common on this Lot being found growing on Red Beech (Dillenia alata), Swamp Turpentine (Lophostemon suaveolens) and Swamp Paperbark (M. quinquenervia). The Ant Plant is only found in lowland forests close to the ocean between Cardwell and Cooktown and is the sole food plant for the “Vulnerable” Apollo jewel butterfly (Hypochrysops apollo apollo).

The “Near Threatened” Thornton Aspen (Acronychia acuminata) is found on Lot 305 as a multiple stemmed individual which was fruiting at the time of survey. This species is only found in rainforests surrounding Thornton Peak, the highest mountain in the Daintree. 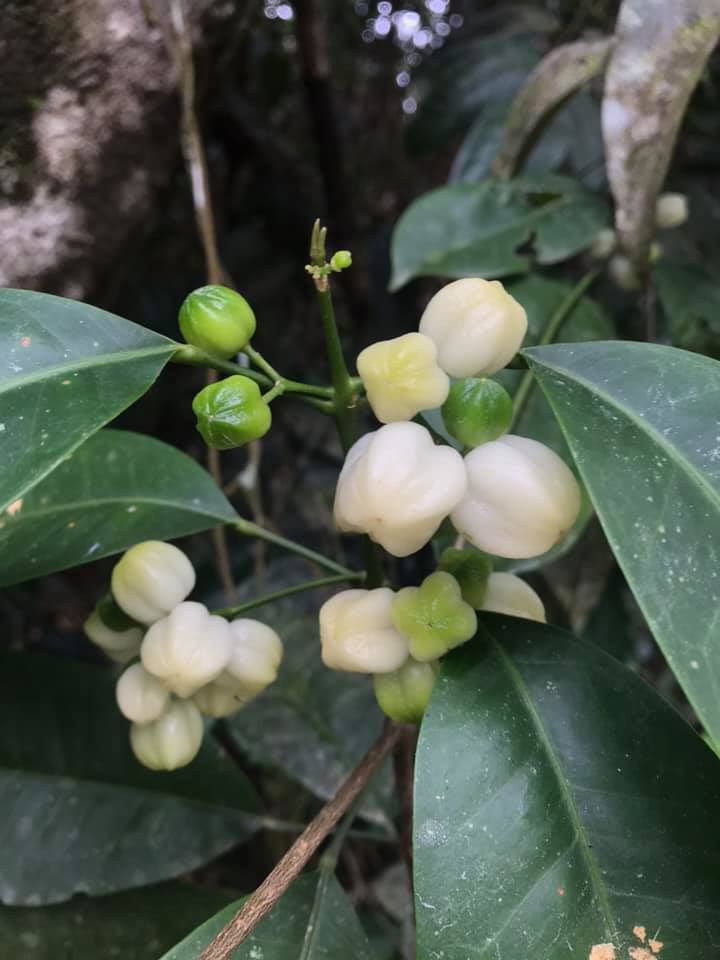 The Thornton Aspen is endemic to the Daintree Rainforest

Additionally, on Lot 305 is the locally common Daintree Satinash (Syzygium monospermum) a species with a symbiotic relationship with Ants that inhabit the trees trunk. This species is only found in lowland rainforests between Cape Tribulation and Julatten. The Daintree Satinash also provides food for the Endangered Southern Cassowary (Casuarius casuarius) and owing to the size of its large white fruit, few other animals would disperse its fruits, other than possibly Fruit Bats.

One specimen of the Daintree Foambark (Jagera madida) is present on Lot 305. This species only occurs in the lowland rainforests of the Daintree and has its closest relatives in SE Asia being quite distinct to that of the other Australian Foambark species.

A handful of specimens of the Cooper Creek Haplostichanthus (Polyalthia xanthocarpa) were identified on Lot 305. This is an understorey shrub to 3m in height and is restricted to the rainforests of the Daintree lowlands, albeit found as far south as the Daintree village, the large majority of records comes from the vicinity of the Cow Bay-Cape Tribulation area. It is a recently described species formally recognised in 2007 as Haplostichanthus ramiflorus and then redescribed as Polyalthia xanthocarpa in 2012. It is very common where it occurs but has a very restricted occurrence.

Another locally common but restricted plant identified on Lot 305 was the myrtle Rhodomyrtus effusa which only occurs between Julatten and the Bloomfield River. In recent years this species has suffered as a result of the exotic pathogen Myrtle Rust, thus preserving known populations of this species helps safeguard it from further decline.

Another Myrtle, albeit it not threatened, found on Lot 305 was the Powderpuff Lilly Pilly (Syzygium wilsonii) which is at its northern most extent of occurrence in the region. This species is widely cultivated in humid districts of Australia and preservation of its wild provenances is important in maintaining genetic integrity as it is well known that cultivated specimens can affect the genetics of wild populations. 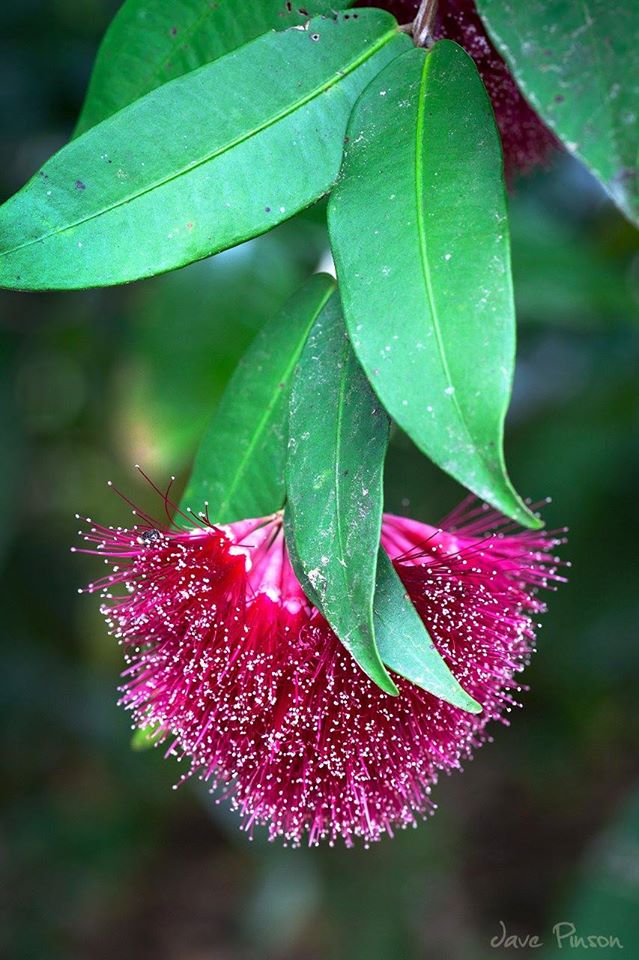 We have an opportunity to buy a Daintree Rainforest property covered in beautiful Fan Palms for only $25,000. Lot 305 Cypress Road, Cow Bay is 1 ha in size and is covered by tropical rainforest. Buying and protecting this property will be a fantastic outcome for conservation as it connects to the Daintree National Park, is in pristine condition and provides vital habitat for the Endangered Southern Cassowary. 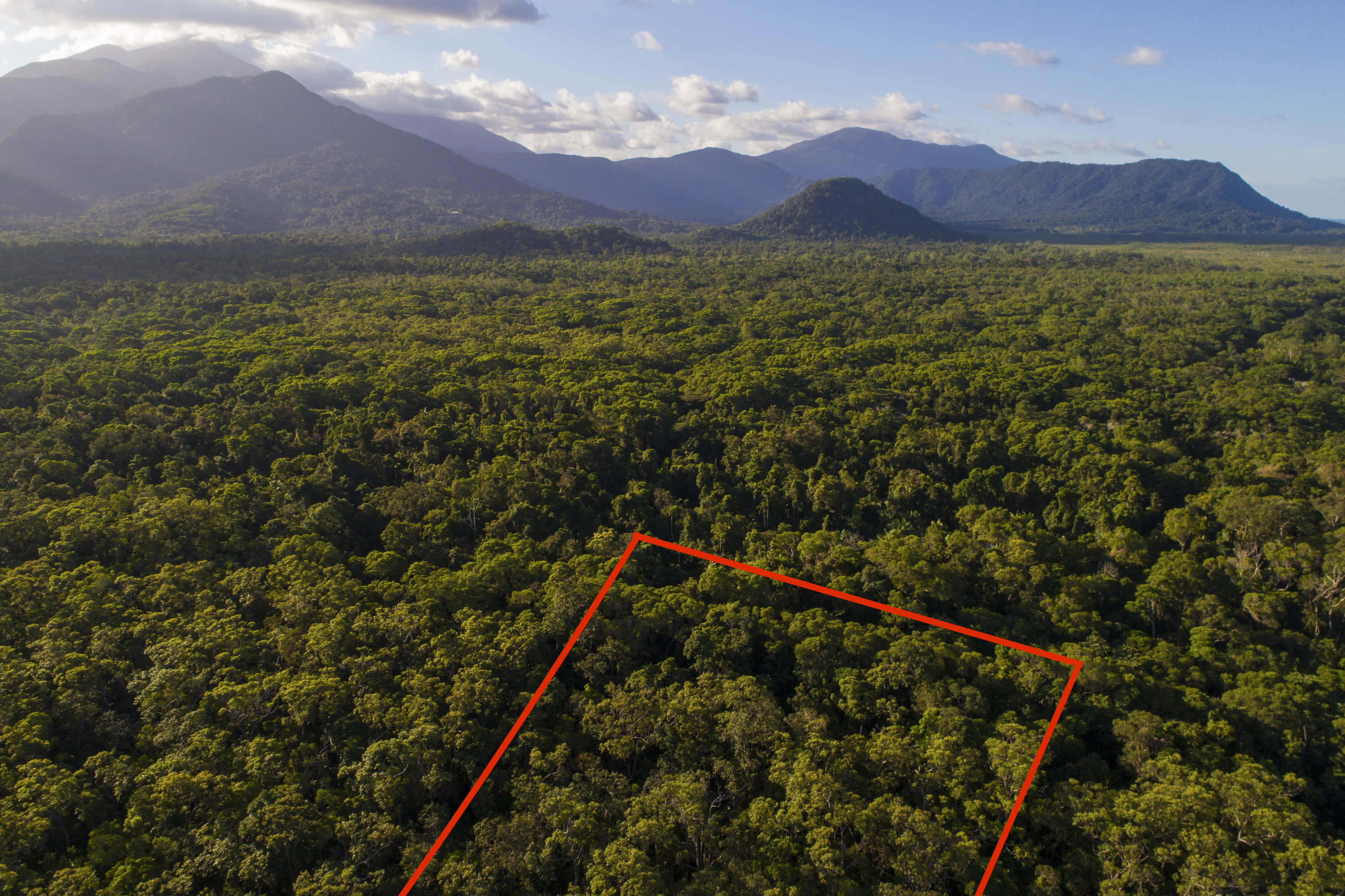 Our friends at We Are Explorers are Crowdfunding to help purchase Lot 305 Cypress Road. Please, make your donation here where you can also check out the perks!

We’ve been offered Lot 305 Cypress Road for this incredibly low price of $25,000 as the current owners share our commitment to protect it forever in the Daintree National Park. We have signed and exchanged a contract of sale. The only challenge we now have is to settle on the purchase in January 2020. To do that we must raise the full amount by the 12th of December 2019. 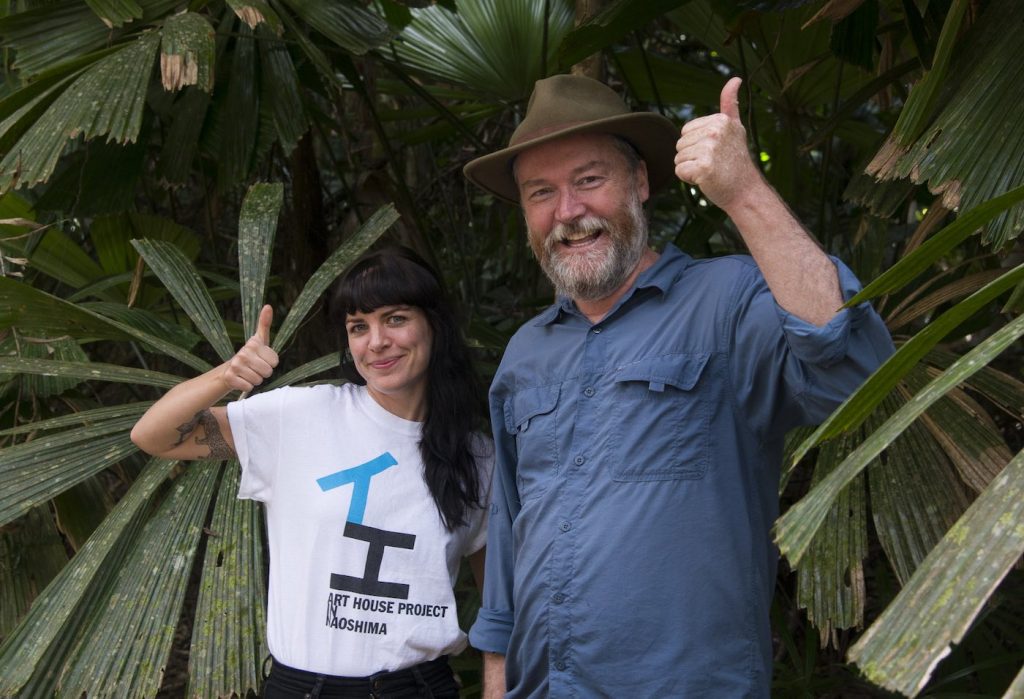 Kate from We Are Explorers with Kelvin Davies