In his TEDx talk, former Douglas Shire Mayor Mike Berwick recounts the Daintree Blockade and World Heritage listing of the Wet Tropics and calls for more action to save the Daintree from the threat of development. 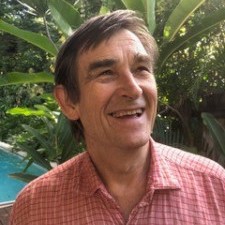 This is a story of how Mike Berwick went from being an arrested environmental protester to being the Mayor of one of the world’s most prestigious holiday destination, the Douglas Shire. Over 30 years ago a group of people and “one-time hippies” buried themselves alive and lived in the rainforest to stop a controversial new road going through the unique Daintree rainforest. While they may not have stopped the road their actions led to the World Heritage listing of the Wet Tropics in Far North Queensland and changed the economy of the Far North forever Mike has a broad science background and history as a green activist, newspaper owner, journalist, farmer and five-term Mayor of the Douglas Shire. He has been a key national leader in the regional natural resource management community. Under his leadership, the Douglas Shire won awards in innovative planning and environment. But he says his role in the Daintree Blockade as protester and spokesperson was the most useful thing he has done. In 2008 Mike was awarded the Order of Australia for service to conservation and the environment through initiatives supporting the preservation of the Daintree rainforest and far north Queensland.

Many people now assume Australia’s most biodiverse rainforest would be protected forever. Despite the efforts of Mike and his colleagues, there are current proposals for a gas-fired power station, road building and a bridge over the Daintree River which support further commercial and residential development in the World Heritage rainforest.

Please help to save the Daintree from the threat of development by signing Rainforest 4's petition.