Rainforest 4 Climate is the motivation for ReForest Now!

The non-profit organisation Reforest Now was established with the objective of planting trees to restore rainforest ecosystems. Kelvin Davies interviewed the founders, Maximo Bottaro and Michael Martin about their work and vision for the future. 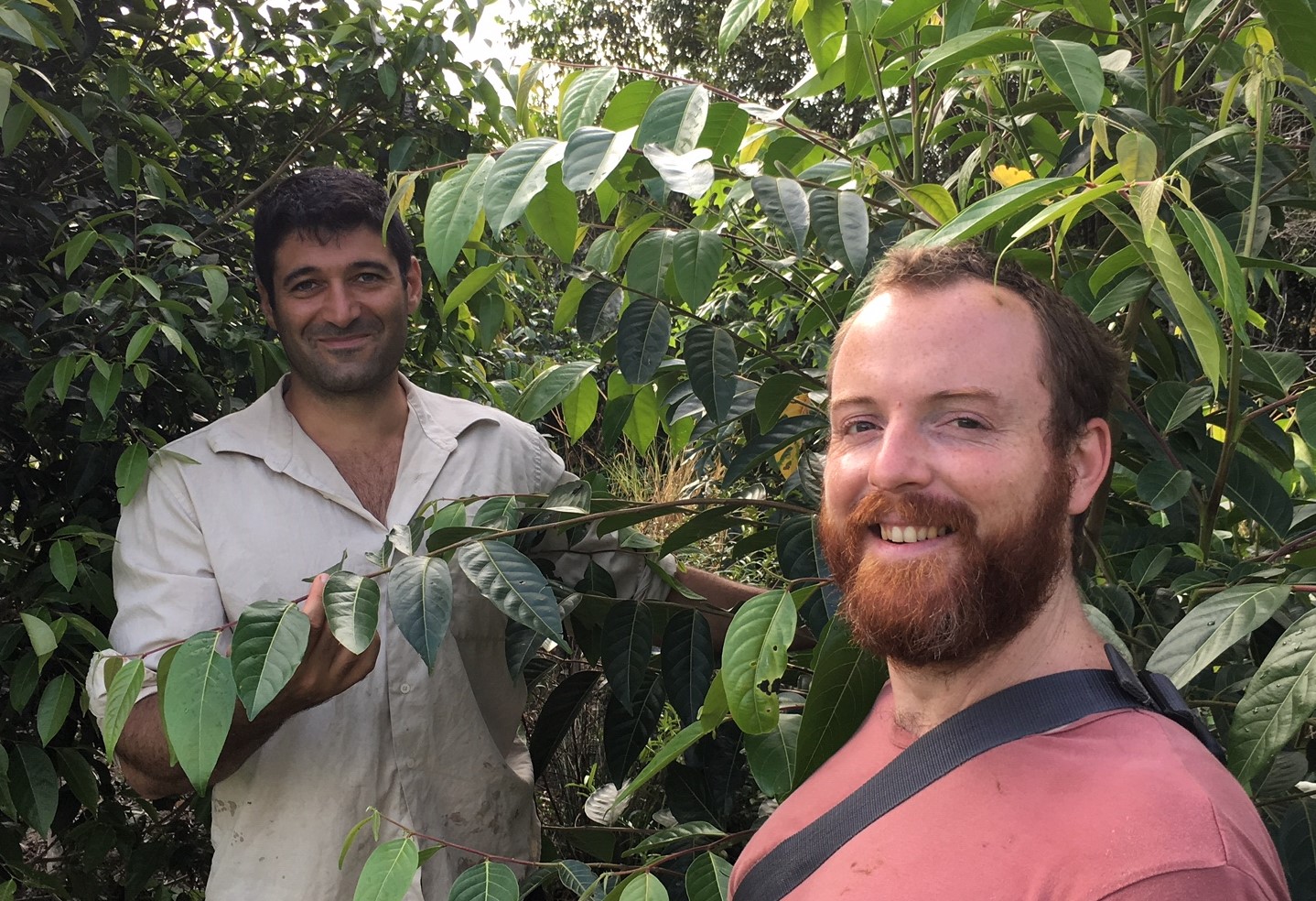 Kelvin: With a name like Reforest Now you sound ready for action. What is it that you want to achieve?

Maximo: We started ReForest Now because we could see huge reforestation works need to happen immediately to tackle species loss and climate change. We can’t slow down Climate Change without protecting and restoring our rainforests. Rainforest restoration is important for everyone, especially for our children who will inherit the problems we've created.

Michael: Humanity has an obligation to protect other species of life, so restoring rainforest is important for that reason too. More habitat will provide more opportunities for threatened species to survive. The time to reforest the planet is now!

Maximo: We could also see that establishing a nonprofit organisation would bring the cost down and that can only result in more trees in the ground. We see a new way forward where the entire process is streamlined and includes volunteers at every step and gets more done for less cost.

Kelvin: It has recently been reported that 1.2 trillion trees would need to be planted to absorb the excess carbon and in the atmosphere.

Maximo: The number of 1.2 trillion new trees was made by a guy called Thomas Crowther, a professor with the UN. He and his team estimated how many trees we would need to plant to soak up our carbon dioxide. He said there are 400 gigatons of carbon stored in the 3 trillion trees that exist today, and if you were to scale that up by another trillion trees that’s in the order of hundreds of gigatons captured from the atmosphere. He said at least 10 years of anthropogenic emissions could be completely wiped out. 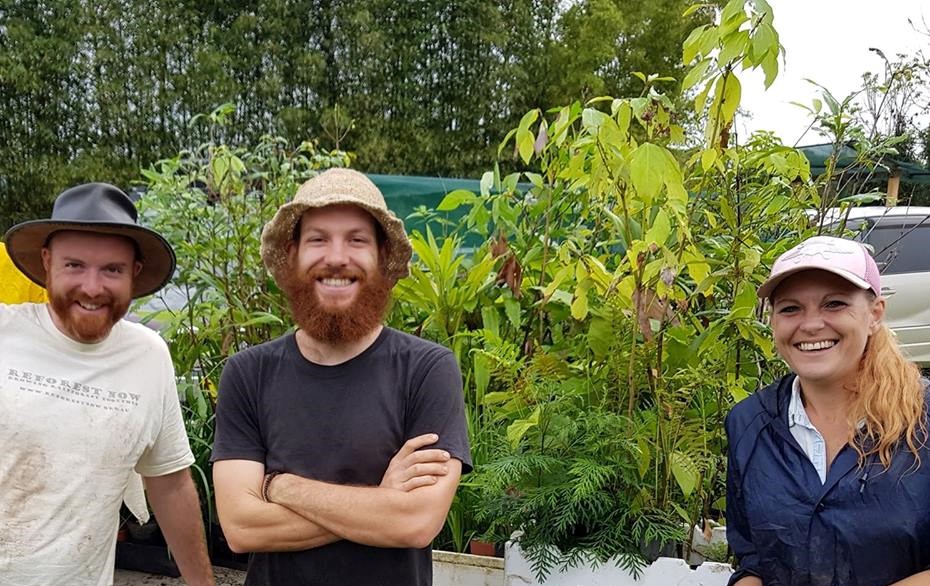 Kelvin: How can we possibly plant 1.2 trillion trees?

Michael: There are 7.7 billion people on the planet so if we round that down to 7 billion then 171 trees would need to be planted by each person. In Queensland, more than one million hectares have been cleared since 2012, so let’s start with an end to deforestation. Natural regeneration can then do part of the job. Rainforests are thought of as fragile, however, they have been around for over 100 million years, so they know how to survive. With the right conditions, natural processes of succession occur, pioneer species colonise bare ground and they are followed by secondary and mature phase species.

Maximo: Then we have to get hands on. In Australia, we've cut down about 40 percent of our forests in the past 200 years, including 75% of our rainforest, leaving a fragmented landscape in their place. So, there is plenty of ex-rainforest land that needs restoring. In a very common sense way, the Earth’s processes have made it so that forests occurred where they did, whether that was rainfall or microclimates or whatever. A good rule of thumb is to put things back the way they were!

Mike: Planting a trillion trees will need an enormous mobilisation of resources, human and financial, but it’s already starting with plantings in the 10’s of millions. The process of planting trees and mainlining them until they are established is well known. What we find interesting is how to achieve efficiency with the financial resources available to us and we’re always thinking of what the most efficient way forward is for us.

Kelvin: How are you getting trees planted?

Mike: We are working in partnership with farmers, other landholders, Landcare groups and local government. We pay our staff to prepare holes for trees and plant and then, wherever possible we involve volunteers. Everyone at ReForest Now knows that some of the time we are all volunteers and where possible, we try to offer an afternoon’s pay to help make it feasible. 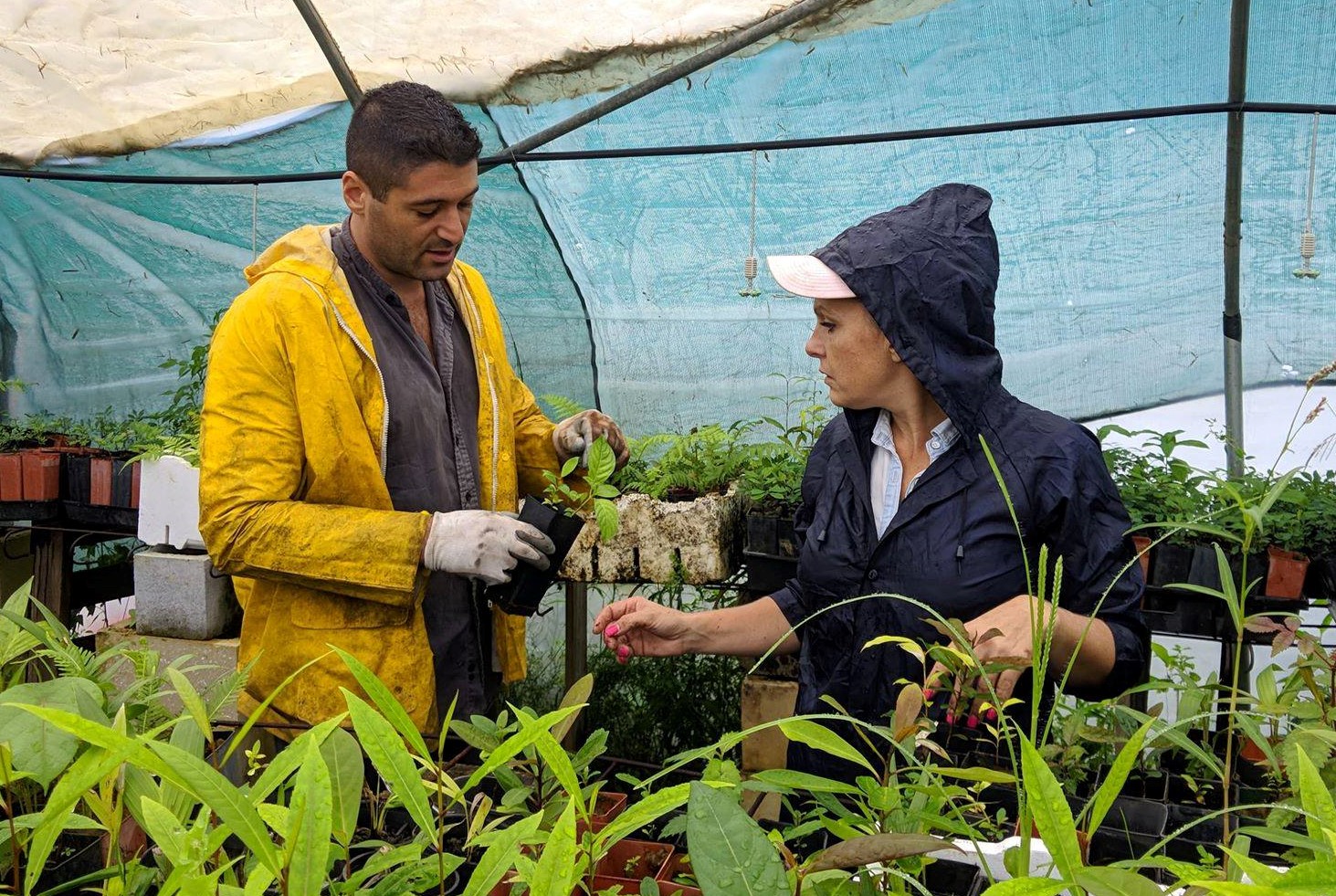 Kelvin: There is an expanding body of evidence supports the idea that forests, create rain. I know you’ve looked into this, what are your conclusion?

Maximo: We did a video on this that is quite comprehensive and animated and references 81 scientific papers. Those are from big name journals like Science, so it’s not a whacky idea. It’s called Bioprecipitation, the idea that biological particles that live in the forest fly up into their atmosphere to grab clouds and drag them down to the ground! Some of those bacteria actively make water stick to them. When they get heavy, fall and that’s rain! These bacteria live on the majority of species of rainforest trees. You know frost on plants? They are the primary cause of frost in the world, because they ‘cool’ water from gas, to liquid to sold! This stuff is so good at making it rain that ski resorts buy it at 2,000 a box and put it in snow machines, it’s mixed with water and sprayed over the slopes, sets to ice! Our conclusions? Well, it seems likely that some areas are getting their rain increased by bacteria and cutting down the forest will lose some of that rain! Additionally, with massive deforestation in the Amazon, they’re finding that it’s causing drought. At the very least it’s water cycling and holding water that forests do that is being lost. There’s a lot to say on this! If you’re interested go to www.reforestnow.org.au and check the video section! 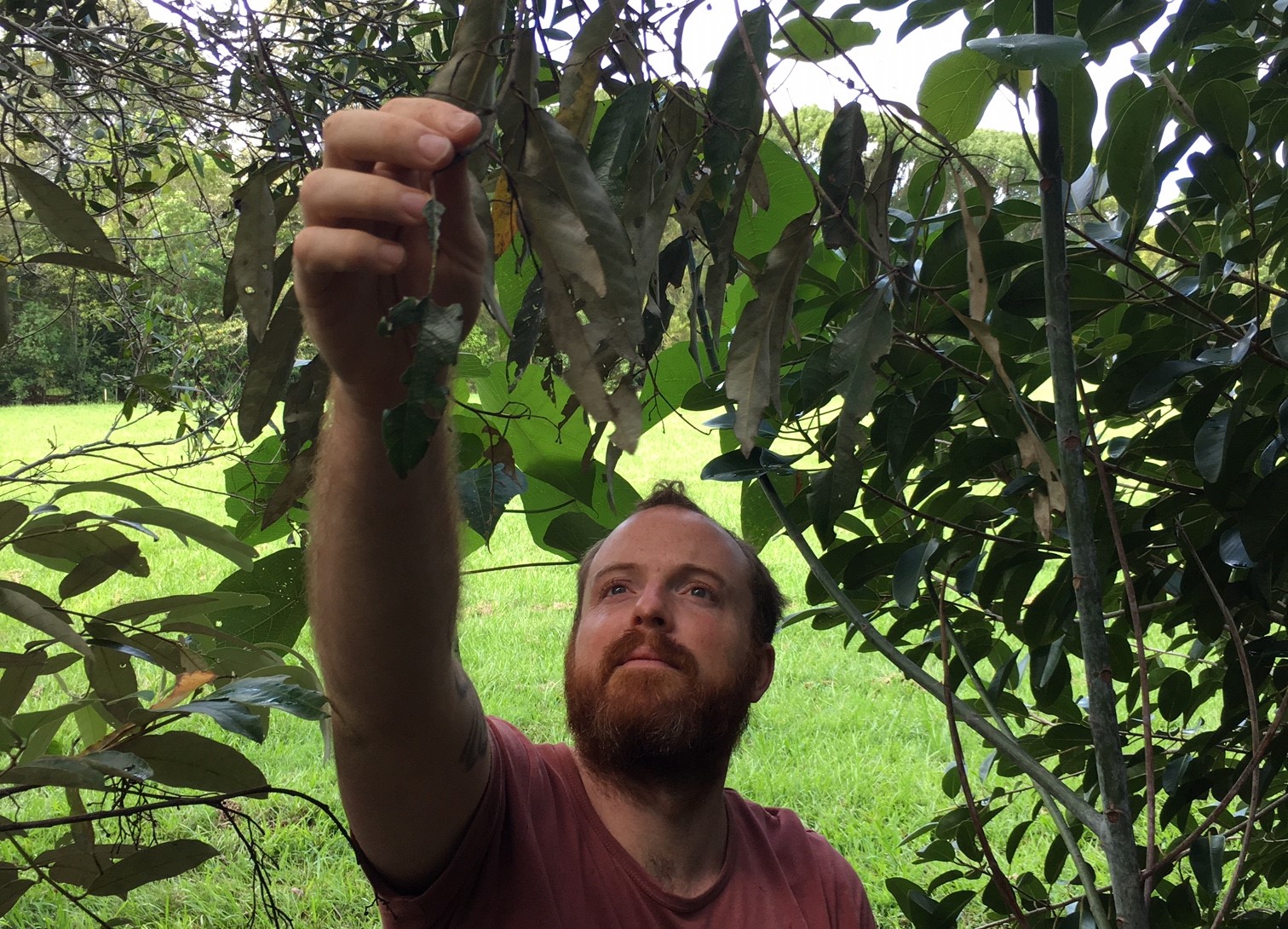 Kelvin: What are your current projects and what’s coming up?

Michael: We’ve been working our project Bringing Back Byron Shire’s Rainforest Birds and planting trees on sites at Wilsons Creek, Mt Chincogan and Mullumbimby. We’ve just been upgrading our nursery at the Mullum Community Gardens so it has three greenhouses now at over 300 square meters and is more volunteer friendly. We are off to the Daintree to plant a few thousand trees in April and also to set up Cassowary monitoring camera traps in some areas we planted out in January to see how the birds are enjoying it.

Maximo: We are also setting up for a big planting at The Farm in Byron. We're also growing a genetically diverse group of one of the rarest rainforest trees of all, the Small-leaved Tamarind, that we want to plant in Wilsons Creek and we’re just now starting a big Birdwing Butterfly vine project for Northern NSW, to make a network of vines so the stray and spread out birdwings can have a better time of recolonising the area. Aside from that, there are a few new landholders coming on the board in the next few weeks that we are helping out with plantings too.

Michael: And Sumatra, we are in the planning stages for a major tree planting project in Sumatra which we intend to implement later in the year. It involves establishing up to 50 hectares of rainforest and in doing so, we would be representing a carbon zero footprint for 4,470 Byron residents. We are pretty confident it’s going to work.

Maximo: Oh yes, we are also making a laymen’s terms guide to saving endangered species. It refers to stuff like where to collect from and why, what genetic diversity is really about, how to spot signs that your species is in genetic trouble and how to save it. This is a work in progress though. 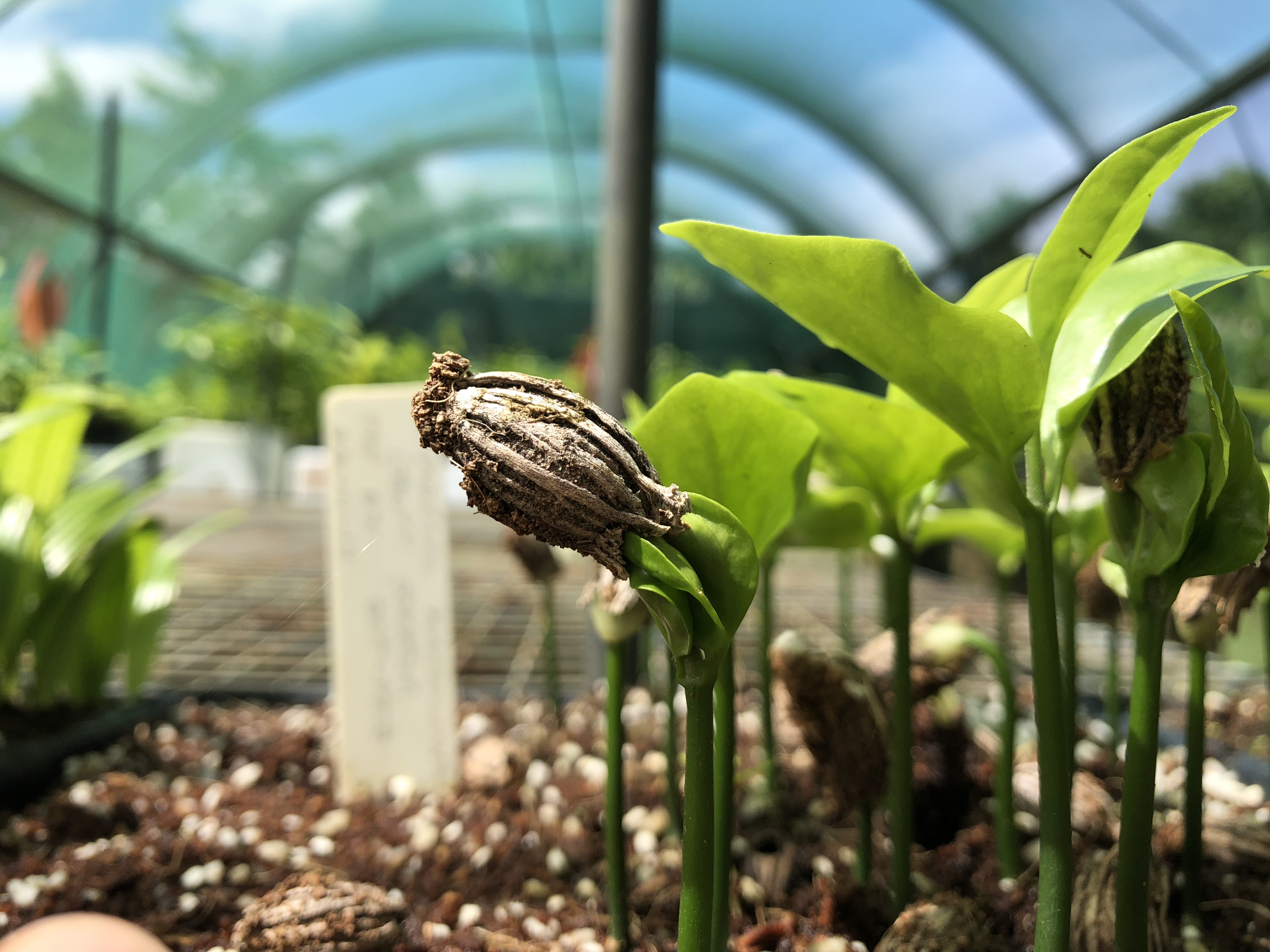 Seeds popping up in the nursery. Pic by Zia

Kelvin: How can people get involved?

Michael: If you live in Northern NSW or near the Daintree Rainforest we’ll have opportunities for you to plant trees with us over the next few months. We have a Facebook group for volunteers who want to come to help with seed collection or potting up at the nursery too. Email or Facebook ReForest Now and we’ll add you. We just put out to the group when we have an afternoon coming up and the people who can make it, come along! It’s usually about 2 or 3 hours and we try to incorporate as many hits from the 80s as we can.

Kelvin: Maximo and Michael, thanks for providing those insights, all power to you and Reforest Now.

Thank you to our wonderful donors through which we are providing ongoing support to Reforest Now.

Please, make a donation and keep this project growing.