The high biodiversity and threatened plants on Lot 93 Cape Tribulation Road at Diwan have identified this property as a priority for acquisition. Our vegetation survey identified an amazing 258 species of native plants, including 5 that are listed as threatened species and 4 more that are endemic to the Daintree Rainforest. 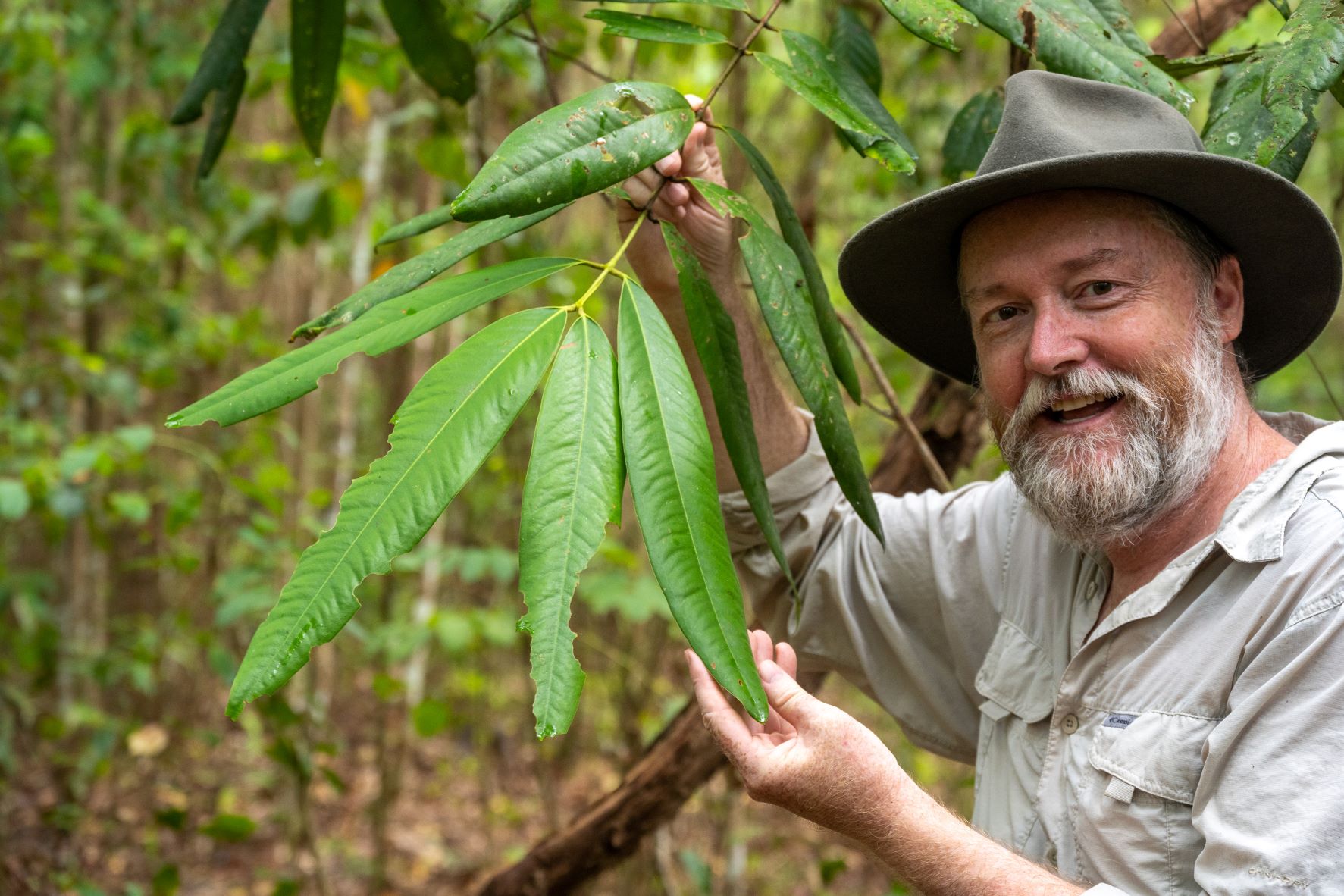 Before we make a commitment to purchase a Daintree Rainforest property for conservation we have ecologists undertake a comprehensive survey to confirm the conservation values. A vegetation survey was undertaken on the 16th of November 2021 by ecologist and botanist Kristopher Kupsch. The survey identified 258 native species of plants confirming the very high diversity of the rainforest on Lot 93.

We've provided an outline of the report below including descriptions of the threatened and endemic plants found on the property.

Lot 93 Cape Tribulation Road is an 8.09-hectare freehold property created through the subdivision of land in 1982. There are two vegetation types on Lot 93 that reflect the remnant vegetation bordering Hutchinson Creek and the regrowth following historical disturbance. The frontage of Lot 93 to the adjacent Hutchinson Creek is 375 m. 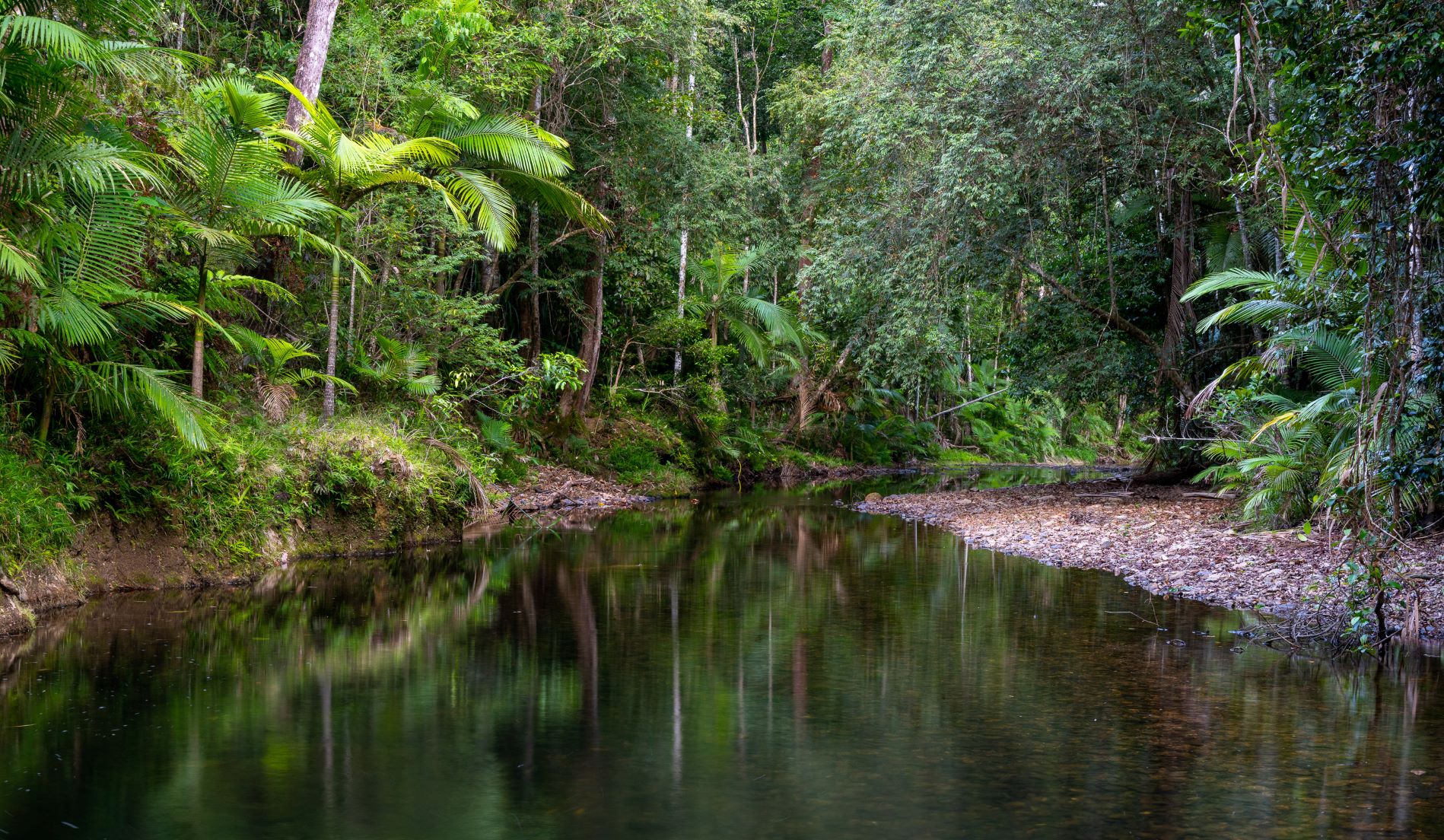 The vegetation bordering the creek is of regional ecosystem 7.3.10a: “Mesophyll vine forest. Moderately to poorly-drained alluvial plains, of moderate fertility. Lowlands of the very wet and wet zone.”

Small areas on the very wet lowlands, especially between the Daintree River and Cape Tribulation, harbour plant species which are extremely restricted and uncommon. Many areas of this ecosystem are considered refugial in nature and are local centres of endemism. Many representatives of primitive families of flowering plants are present, including the monotypic family Idiospermaceae. The ecosystem is the habitat for many threatened plant species. 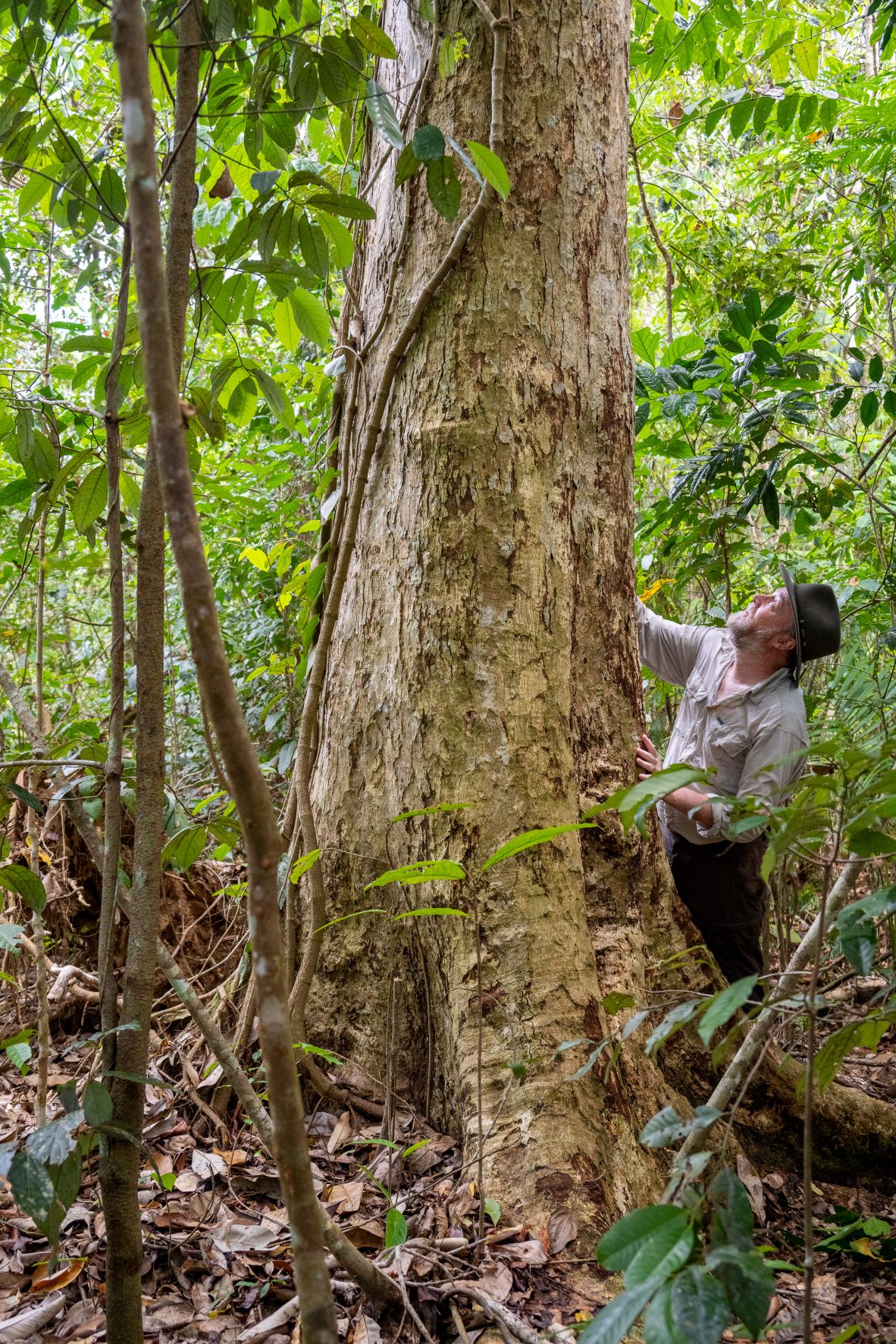 Threatened species of plants on Lot 93

There are only six records of Malayan Brighteye (Torenia polygonoides) in Australia. 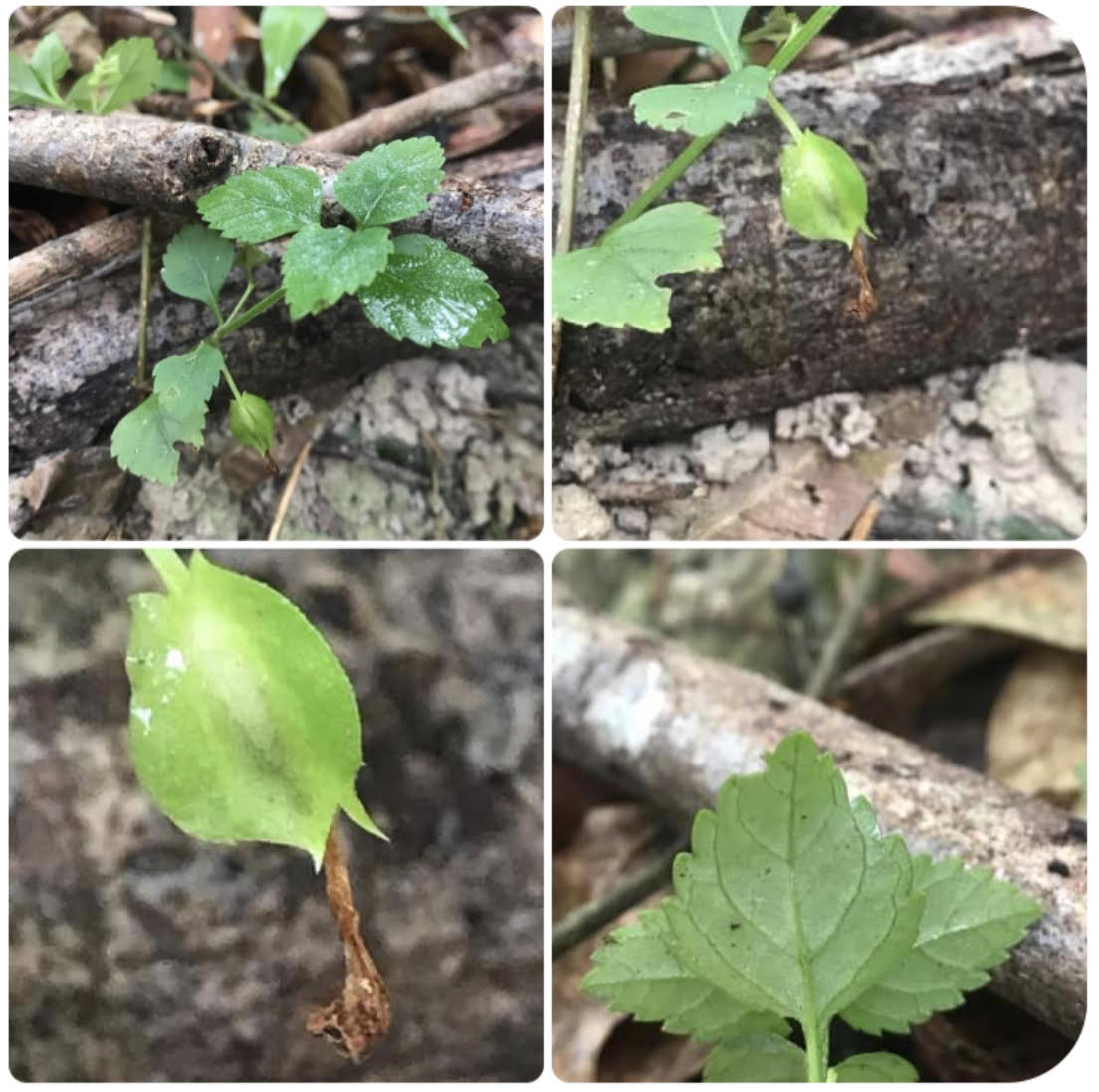 There are also four plant species that are Daintree endemics (species have their distribution largely restricted to the Daintree lowlands) occurring on Lot 93. They are:

Lot 93 is located on Hutchinson Creek which flows off Thornton Peak. This area is a centre for the potential evolution of new species. During the vegetation survey, the botanist and ecologist identified a potentially new species of Bolwarra (Eupomatia) was identified from Lot 93 and additional investigations will now follow.

Other plants of importance on Lot 93

A range extension for the Sapindaceae tree species Rhysotoechia flavescens was made, extending the range north from the Daintree village, the previously known northern limit of this species which extends south to near Tully.

Hope’s Cycad (Lepidozamia hopei) occurs on Lot 93. This species of Cycad is the largest growing in the world and was once utilised by Aboriginal people as a food source. It has evolutionary links dating back some 200 million years and along with other ancient species form some of the reasons why the adjacent Daintree National Park was listed as a World Heritage Area in 1988. 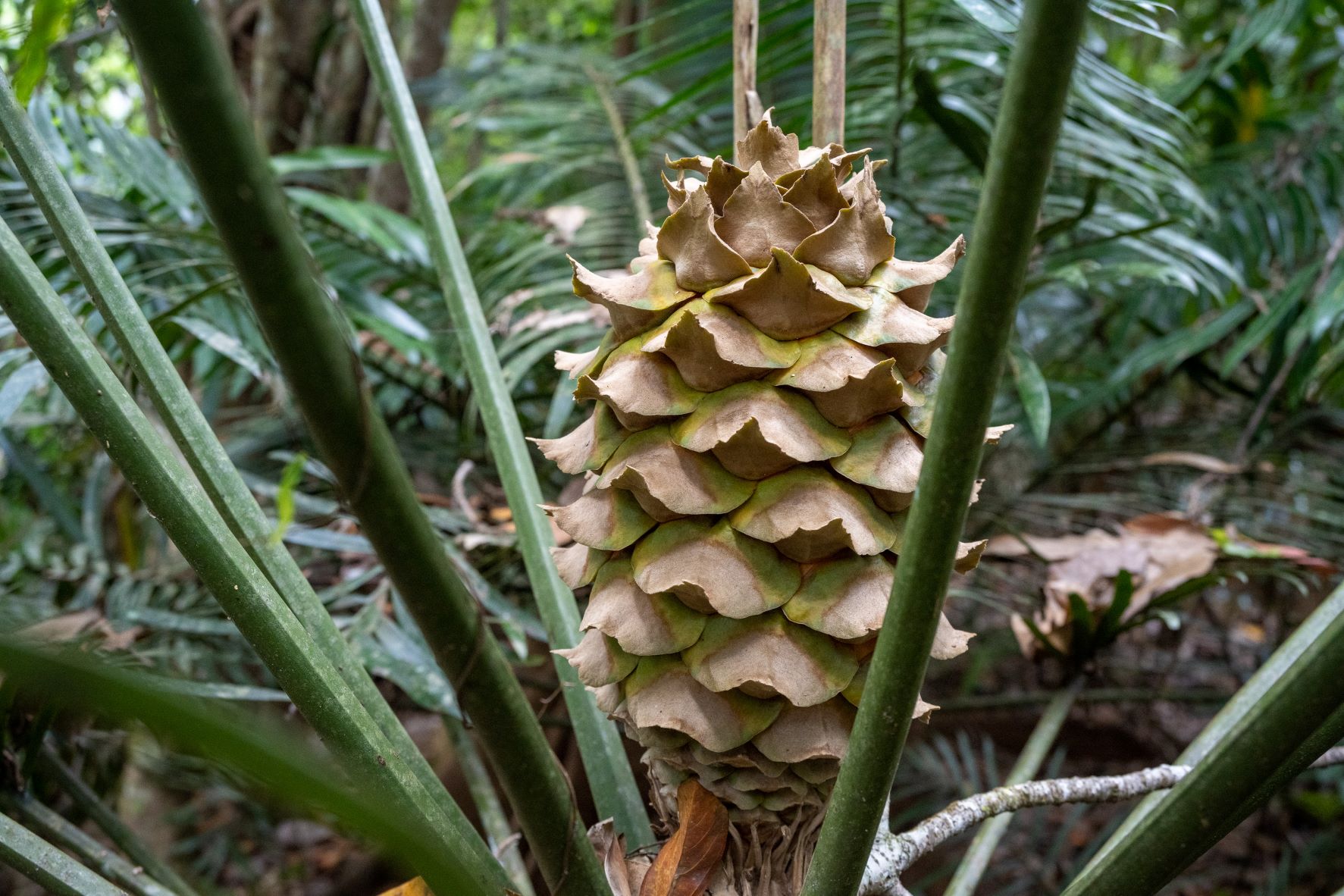 The vegetation bordering Hutchinson Creek is remnant while most of the remaining vegetation is regrowth. In 1982 (before the creation of the subdivision) Lot 93 Cape Tribulation Road was part of a larger freehold property that was partially cleared and used for grazing cattle. The remainder of the site, bordered by Cape Tribulation Road and north of the internal access and east of the drain in the west is a mosaic of regrowth of great significance.  This regrowth is thirty to forty years old. 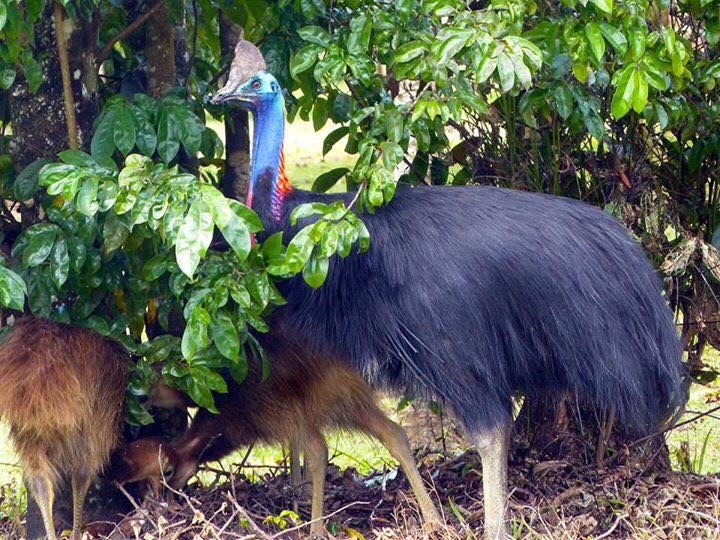 Southern Cassowary at Diwant in the Daintree Rainforest

This Endangered native Ginger was observed on Lot 93 as just one plant. This Native Spiral Ginger is restricted to the area between Tully and the Daintree and again in the Torres Strait however is endemic to Queensland. It is a unique species in that many of its relatives are from Asia and has made its way into the tropical rainforests of the Wet Tropics over thousands of years through natural migration during favourable climatic conditions of the past or by chance long distance dispersal.

Noah’s Walnut is found on Lot 93 as occasional seedlings and young trees.  Its large yellow oblong shaped fruits are dispersed by the Southern Cassowary. This species is only found naturally within the Daintree rainforests predominately north of the Daintree River and south of Cape Tribulation. This tree is noticeable in the forest as it produces a vibrant display of limp red new leaves.

This Vulnerable climbing Pandan was observed as a small plant climbing trees bordering Hutchinson creek. It cooccurs with the superficially similar F.excelsa.

The epiphytic Ant Plant (Rubiaceae) was identified as 1 plant high in a Paperbark tree located in the centre of Lot 93. Favourable habitat exists for this species on the site and in future others could colonise. The species was identified in great amounts on a property located on Cypress road immediately to the south of Lot 93.

There are only six records of Malayan Brighteye (Torenia polygonoides) in Australia.

Other significant Daintree endemics that occur on Lot 93:

One tree of this species was identified within remnant vegetation bordering Hutchinson Creek. It displays pink new leaves. The Daintree Cleistanthus is a small tree only found between the Bloomfield and Daintree rivers in lowland rainforest and again overseas in Southeast Asia.

A small handful of Daintree Foambark’s are present on Lot 93. This species only occurs in the lowland rainforests between Julatten – Bloomfield.

Often locally common, one mature tree with a small number of seedlings was identified from Lot 93. The locally common Daintree Satinash is a unique tree that has Ants that inhabit its trunk. This species is only found in lowland rainforests between Cape Tribulation and Julatten. The tree provides food for the Endangered Southern Cassowary and owing to the size of its large white fruit that it produces straight from the trunk, few other animals other than possibly Fruit bats would disperse it.

Other values of Lot 93

The riparian vegetation offers the best account of preclearance habitat across the site. The complexity and diversity of the creek edge vegetation is the highest ecological asset of Lot 93 and should be enhanced and expanded across the site. Variations in drainage will dictate natural species recruitment and thus plantings should consider this important edaphic situation. Some areas of the lot are prone to inundation and sections have lost topsoil due to historical excavations.

The site is mapped as containing lowland rainforest however the mosaic is a mix of Paperbark woodland species and rainforest. A disused large borrow pit quarry is evident and ponded water would be found in the wet season.

The site offers good habitat for faunal species. Several calling birds such as Wompoo Pigeons were noted or observed as were diggings from marsupials, presumably Bandicoots. Roosting Flying Foxes were observed in Paperbark trees. Several terrestrial termite mounds were noted.

A staggering 19 native Laurel species, 14 Sapindaceae species and 9 species in the Meliaceae family were identified on-site. This suggests very high mobility of fauna across the site, especially owing to the fact 95% of the site has been historically disturbed.

Through the survey, 40 exotic plant species were identified. One exotic weed species Pond Apple (Annona glabra) is listed as a Weed of National Significance. It was identified in the wetter sections of Lot 93, predominantly in the NW corner and western drain. It is also listed as a restricted invasive plant under the Biosecurity Act 2014.

Lot 93 has experienced large scale disturbance and shade-tolerant weeds such as Tristemma (Tristemma mauritianum) should be targeted. A relatively new arrival the Brazilian Cherry (Eugenia brasiliensis) was noted as seedlings and should be controlled.

Singapore Daisy (Sphagneticola trilobata) should be eradicated from the site as it arrests succession.

All planted garden ornamentals should be removed from the site including any spurious species planted within the roadside planting, such as Raintree (Samanea saman).

An aquatic ecology survey of Hutchinson Creek has also been completed which identified the presence of the critically endangered Daintree Rainbowfish. Read more here.