The amazing biodiversity of Daintree's Lot 155

Ecologist and botanist Kristopher Kupsch surveyed Lot 155 Cape Tribulation Road in the Daintree Lowland Rainforest in February 2020 finding 240 species of plants on the 8.835 hectares, which included seven of conservation importance. This confirmed the property as our number one priority for acquisition and inclusion in the Daintree National Park. 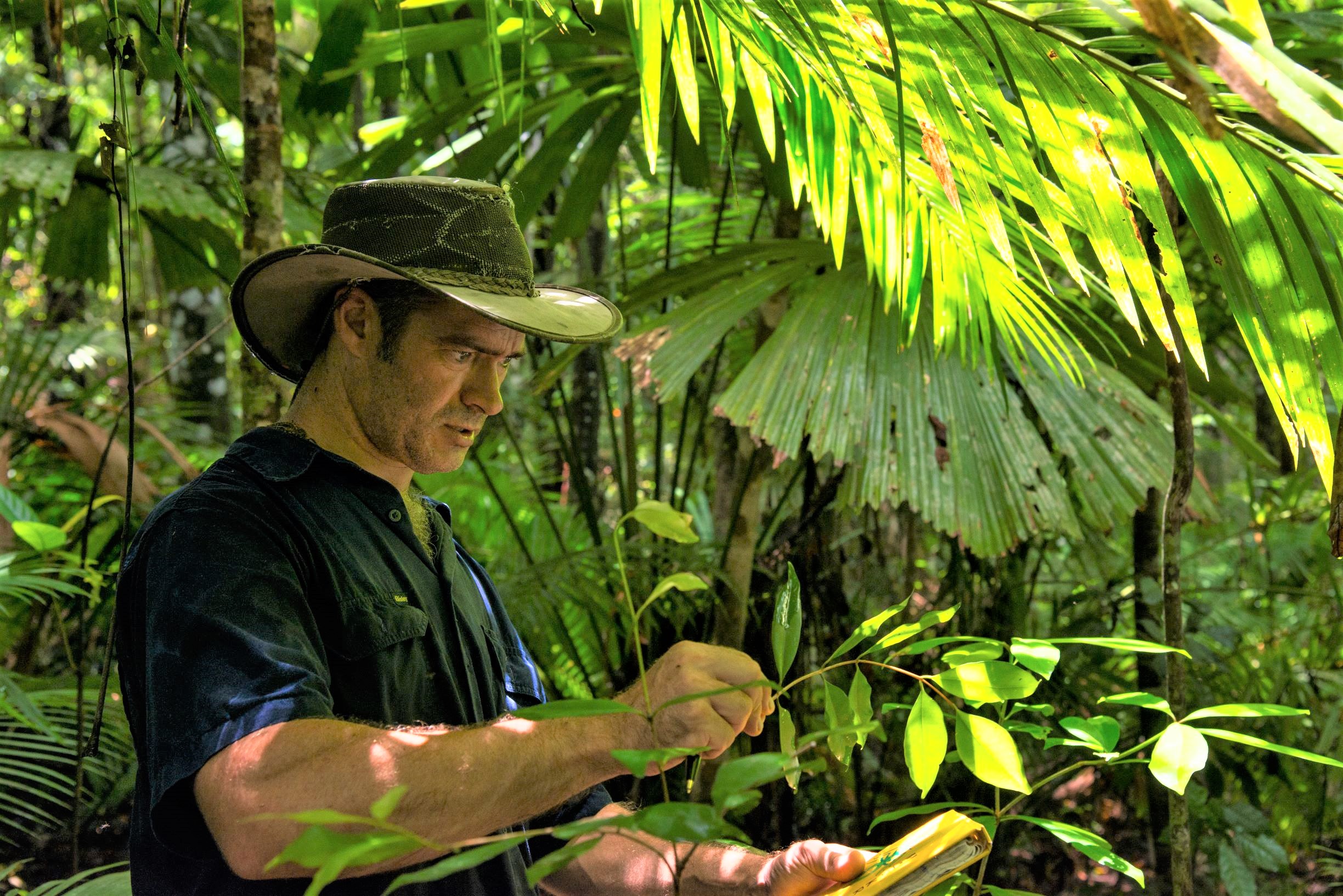 Kristopher Kupsch in the Daintree Rainforest - Pic by Steven Nowakowski

Much of the vegetation on Lot 155 is classified as Regional Ecosystem 7.3.10a “Mesophyll vine forest. Moderately to poorly-drained alluvial plains, of moderate fertility. Lowlands of the very wet and wet zone” with the eastern area of Lot 155 having Regional Ecosystem 7.3.28a “Open water within natural non-tidal rivers. Rivers and creeks. Riverine wetland or fringing riverine wetland”.

RE 7.3.10a is listed as “Of Concern” under the Vegetation Management Act 1999. This vegetation type is categorised as Primary habitat for the Southern Cassowary by the Department of Environment and Resource Management.

The Queensland Government has noted the special values of Regional Ecosystem 7.3.10a: “Small areas on the very wet lowlands, especially between the Daintree River and Cape Tribulation, harbour plant species which are extremely restricted and uncommon. Many areas of this ecosystem are considered refugial in nature and are local centres of endemism. Many representatives of primitive families of flowering plants are present, including the monotypic family Idiospermaceae. The ecosystem is the habitat for many threatened plant species”.

Regional Ecosystem 7.3.28a is also listed as “Of Concern” under the Vegetation Management Act 1999. This vegetation type is dominated by ponded water. The Queensland Government indicates a pre-clearing extent of 8,000 ha existed and today 7,000 ha remains of RE 7.3.28

The species of conservation importance found to occur on lot 155 include:

Seven species are listed on the Nature Conservation Act 1992.

The Near Threatened China Camp Laurel (Beilschmiedia castrisinensis) was identified on lot 155 by a single seedling. This species is locally common in the district however is only found in the Daintree Rainforests north of the Daintree River and South of the Bloomfield River. This species has large fruits the size of tennis balls and its fruits are only dispersed by the Southern Cassowary and thus a symbiotic relationship (+/+) has evolved.

The local endemic Daintree Cleistanthus (Cleistanthus myrianthus) is found on lot 155. This species of small tree also occurs in South East Asia however in Australia is only found between the Bloomfield and Daintree rivers in lowland rainforest. Its seeds are dispersed by gravity which allows independence from an animal vector however the trade-off is limited dispersal from the parent tree and poses the question how the species also occurs thousands of kilometres to the north but not in-between.

The Vulnerable Gray’s Walnut (Endiandra grayi) was found on lot 155. This large tree is only found between the Daintree River and Cape Tribulation in lowland rainforest below 40m asl. Its large seeds are solely dispersed by the Southern Cassowary. There was just one individual found on lot 155.

Noah’s Walnut (Endiandra microneura) is commonly found on lot 155 and is listed as Near Threatened. There is an abundance of seedlings, presumably from dispersal by the Southern Cassowary as mature specimens are absent from the site. This species is only found naturally within the Daintree rainforests predominately north of the Daintree River and south of Cape Tribulation.

The Vulnerable Climbing Pandanus (Freycinetia percostata) is abundant on lot 155 especially within the wetter swampy regions. It is restricted mainly to the Daintree lowlands and again on Cape York at Iron Range and overseas in Papua New Guinea. This climbing monocotyledon plant possesses unique leaves which the bases catch water and thus provide habitat for arboreal invertebrates and frogs. Its occurrence in the Daintree highlights the region's unique microclimate in that subequatorial species have been able to colonise by natural migration from the north over millions of years often eventually becoming unique genetic entities of their own. 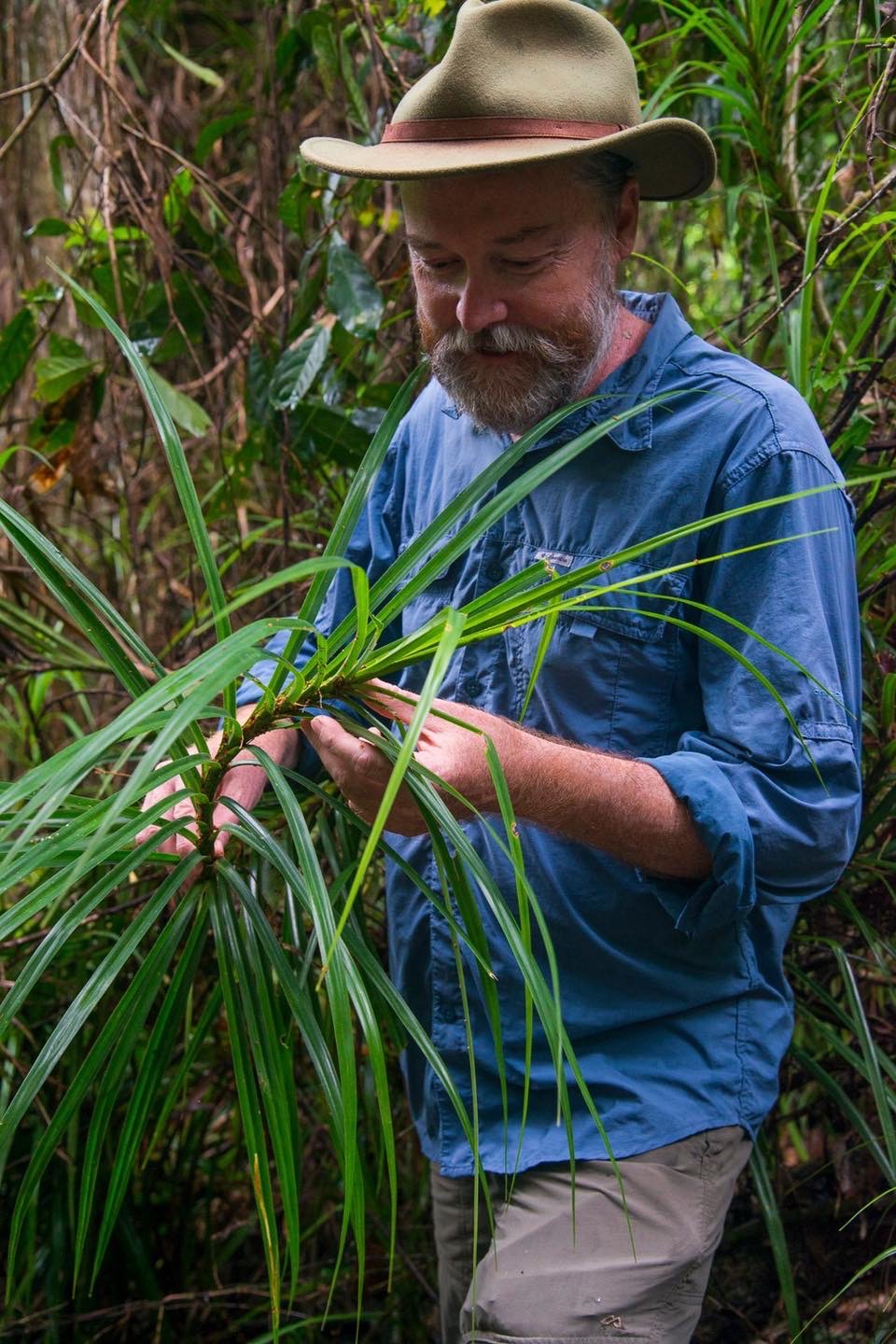 The local endemic Daintree Foambark (Jagera madida) is present on lot 155. It is a slender tree with large furry leaves and red new growth. It has close relatives in Asia and was once believed to be a subspecies of a southeast Asian Foambark however in 2006 was described as a separate species endemic to the Daintree rainforests.

The Vulnerable Daintree Mesua (Mesua lanarchiana) was identified from lot 155. This species is restricted to the Daintree rainforests. There is one additional currently botanically undescribed species of Mesua in the Wet Tropics however all other Mesua species are in South-east Asia. This suggests an ancient dispersal event from the north and owing to the absence of this group of plants from Cape York, that the Daintree is a refugial region for subequatorial species such as Mesua.

The local endemic Cooper Creek Haplostichanthus (Polyalthia xanthocarpa) were identified on lot 155. This is an understorey shrub to 3m in height and is restricted to the rainforests of the Daintree lowlands, albeit found as far south as the Daintree village, the large majority of records comes from the vicinity of the Cow Bay-Cape Tribulation area. It is a recently described species formally recognised in 2007 as Haplostichanthus ramiflorus and then redescribed as Polyalthia xanthocarpa in 2012. It is very common where it occurs but has a very restricted occurrence.

The Near threatened fern (Pteridoblechnum acuminatum) was identified on lot 155 as one small colony.

The Near threatened Daintree Ryparosa (Ryparosa kurrangii) occurs throughout the better remnant forests of lot 155. This species relies on the Southern Cassowary for seed dispersal and produces flowers and fruits direct from its trunk. It is only found in the Cow Bay to Cape Tribulation area with its closest relatives in New Guinea. There is data to suggest this species has specialised symbiotic relationships with Ants.

The local endemic Storckiella australiensis was identified on lot 155. This is a rare tree known only from the region between the Daintree River and Cape Tribulation and another smaller occurence near Babinda.

The local endemic but common Daintree Satinash (Syzygium monospermum) was identified on lot 155, a species with a symbiotic relationship with Ants that inhabit the trees trunk. This species is only found in lowland rainforests between Cape Tribulation and Julatten. The Daintree Satinash also provides food for the Endangered Southern Cassowary (Casuarius casuarius) and owing to the size of its large white fruit, few other animals would disperse its fruits, other than possibly Fruit bats.

Also found on Lot 155 Cape Tribulation Road was the Zamia Fern (Bowenia spectabilis) which is actually a species of cycad, a very ancient group of plants. They don't produce flowers and reproduce by means of cones borne on separate male and female plants. The cones of the Zamia Fern seem to pop out of the ground! The Zamia Fern is endemic to Queensland.

Kelvin Davies with a Zamia Fern - Pic by Steven Nowakowski

During the flora survey of Lot 155 Cape Tribulation Road, Kristopher Kupsh and Kelvin Davies found a very large Hope's Cycad (Lepidozamia hopei). These cycads are very slow-growing and this specimen is estimated at over 1,000 years old. It is endemic to Queensland and is the world's largest known species of cycad. 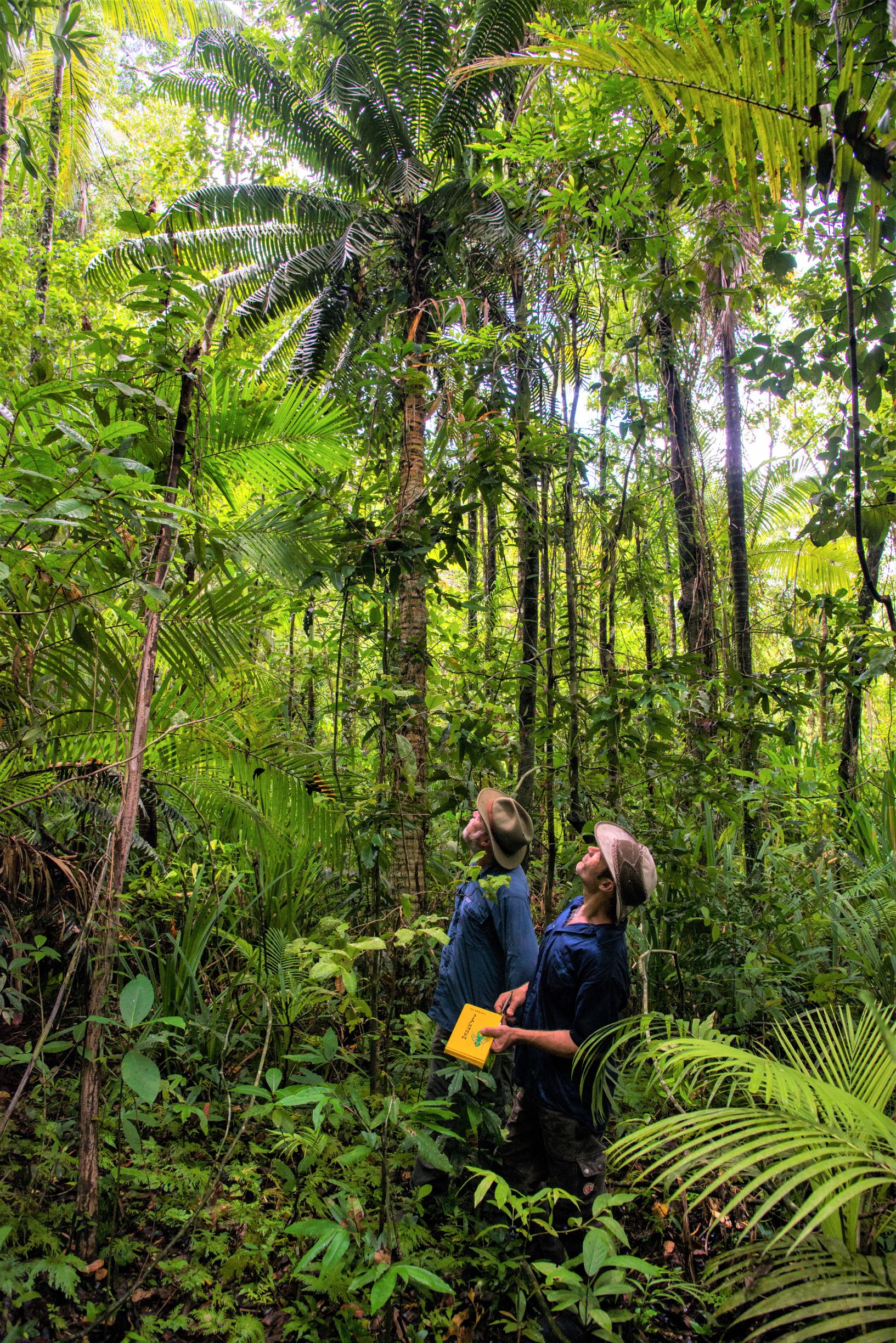 The Archidendron or Lace Flower (Archidendron ramiflorum) grows as a slender understory tree. It is endemic to North East Queensland and produces white powder-puff flowers from the trunk. This one was found while surveying plants on Lot 155 Cape Tribulation Road. 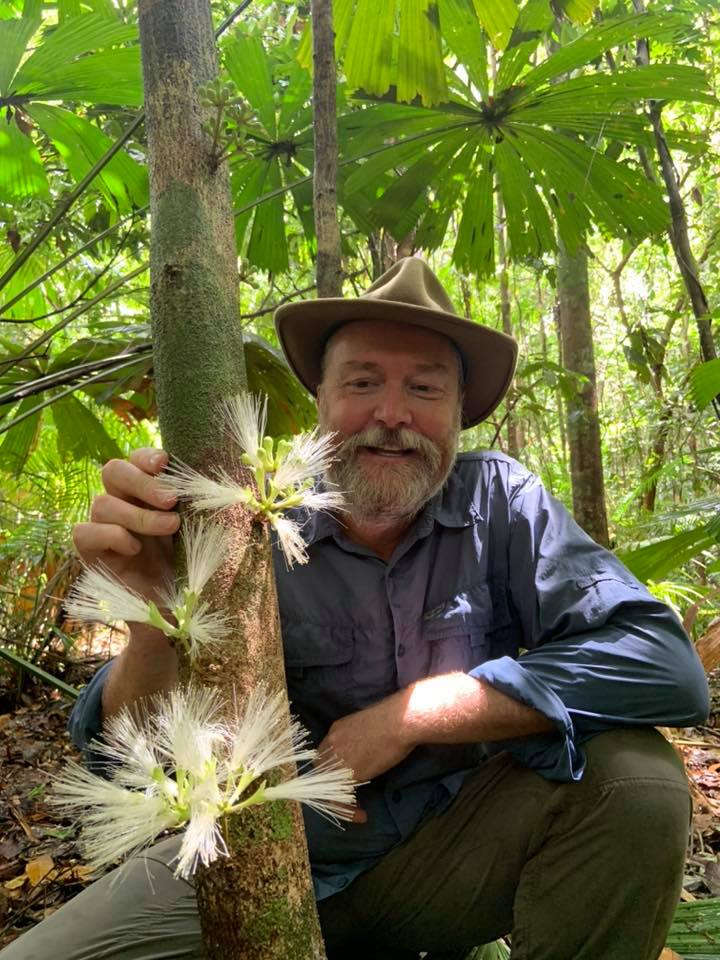 Kelvin Davies with the Archidendron - Pic by Steven Nowakowski