Why our Founder is doing push-ups, sit-ups and squats in the rainforest

Rainforest 4 Foundation Founder Kelvin Davies is no stranger to challenges. Having worked in rainforest conservation for nearly 30 years he knows exactly what it’s like to step up for the greater good. It’s no surprise then, that this month, he’s signed up to the HalfCut PSS Challenge. 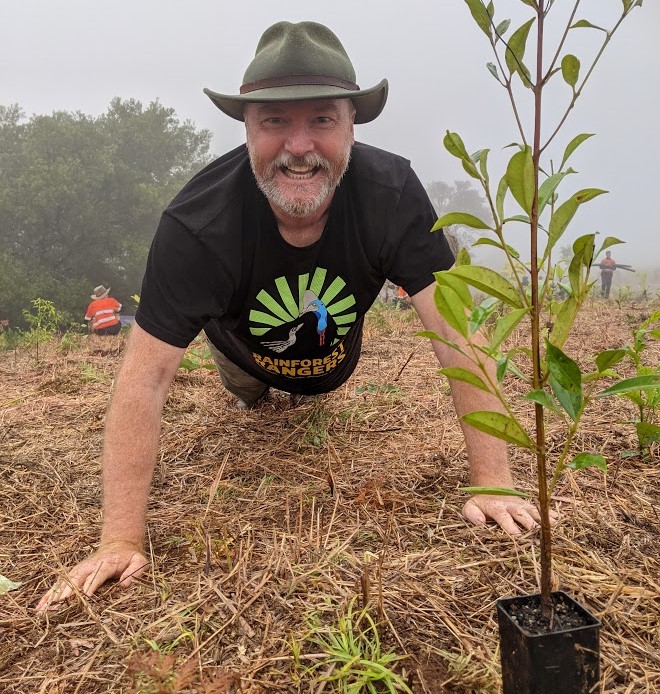 The HalfCut PSS Challenge is recruiting everyday people to do 30 push-ups, sit-ups and squats each day in March to raise funds to rewild the Earth. The ultimate goal is to restore the Earth’s rainforests and establish one million trees over the next three years.

“Like many people, I spend a lot of time behind a desk,” Kelvin said. “So, I really need this exercise.”

Kelvin has been dedicated to rainforest conservation for nearly all of his working life and he’s passionate about restoring the Earth’s rainforests.

“As well as devoting time to projects like Daintree Buy Back, I’ve also been involved in hands-on ecological restoration,” he said.

“The first community tree planting I supported in 1988 wherewith others I helped to plant 10,000 trees in one day.”

“More than half the world’s forests have been destroyed and we know the most effective solution to the climate crisis is to replant rainforests,” Kelvin said.

“Through the PSS Challenge, our friends at HalfCut have already raised more than $80,000. Every dollar donated will establish one rainforest tree.”

“Our goal in the next three years is to establish one million rainforest trees, here in Australia, but also in Indonesia and India,” Kelvin said.

Kelvin is joined by more than 450 people who have signed up for the challenge: taking action against climate change and deforestation and rewilding themselves in the process.

“I’ve always believed the world can be a better place,” said Kelvin, “and we don’t have to wait for governments to take action.”

“Every person has the ability to demonstrate leadership and when the people lead, governments will follow.”

You can follow Kelvin’s PSS Challenge journey on his Facebook page, Kelvin Davies 4 the Rainforest or check out some of the other inspirational participants at www.psschallenge.org.