We did it! Together we protected Daintree’s Lot 157.

We did it! With your help, we have secured Lot 157 Cape Tribulation Road in the Daintree Lowland Rainforest and we will now ensure it's protected forever. 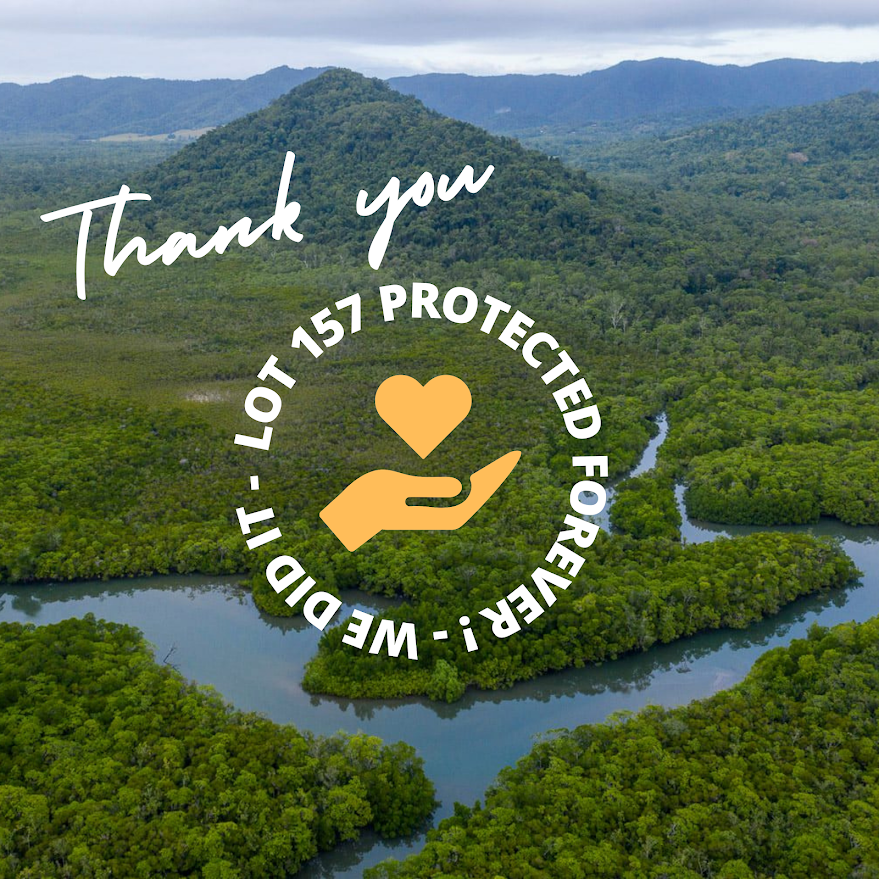 The Rainforest 4 Foundation and its partners are extremely pleased to announce the purchase and protection of Lot 157 Cape Tribulation Road at Diwan, in the Daintree Lowland Rainforest.

The Daintree Lowland Rainforest is a living museum and today thanks to the generosity of donors in Australia and around the world one of the most important locations for species diversity has been protected forever.

While the Rainforest 4 Foundation and its partners are delighted with the purchase and protection of this property the individuals who deserve the greatest recognition and appreciation are the thousands of people who donated to raise the $404,865 needed to fund the acquisition and protection of the property.

Kelvin Davies, the Founder of Rainforest 4 Foundation said, “Without their generous support this fantastic outcome would not have been possible. Thanks to their support, this special rainforest property is protected forever”.

The rainforest vegetation found on Lot 157 is the grandest and most archaic of all rainforests in Australia, possessing many primitive flowering plants.

The high diversity of 270 plant species and the presence of 12 plant species listed under conservation legislation highlights the refugial endemism of this particular rainforest on Lot 157.

Kelvin said “this is one of the reasons the adjoining Daintree National Park was declared as a World Heritage Area. It’s just so important to conservation and to science in the study of the evolution of plants on Earth”. 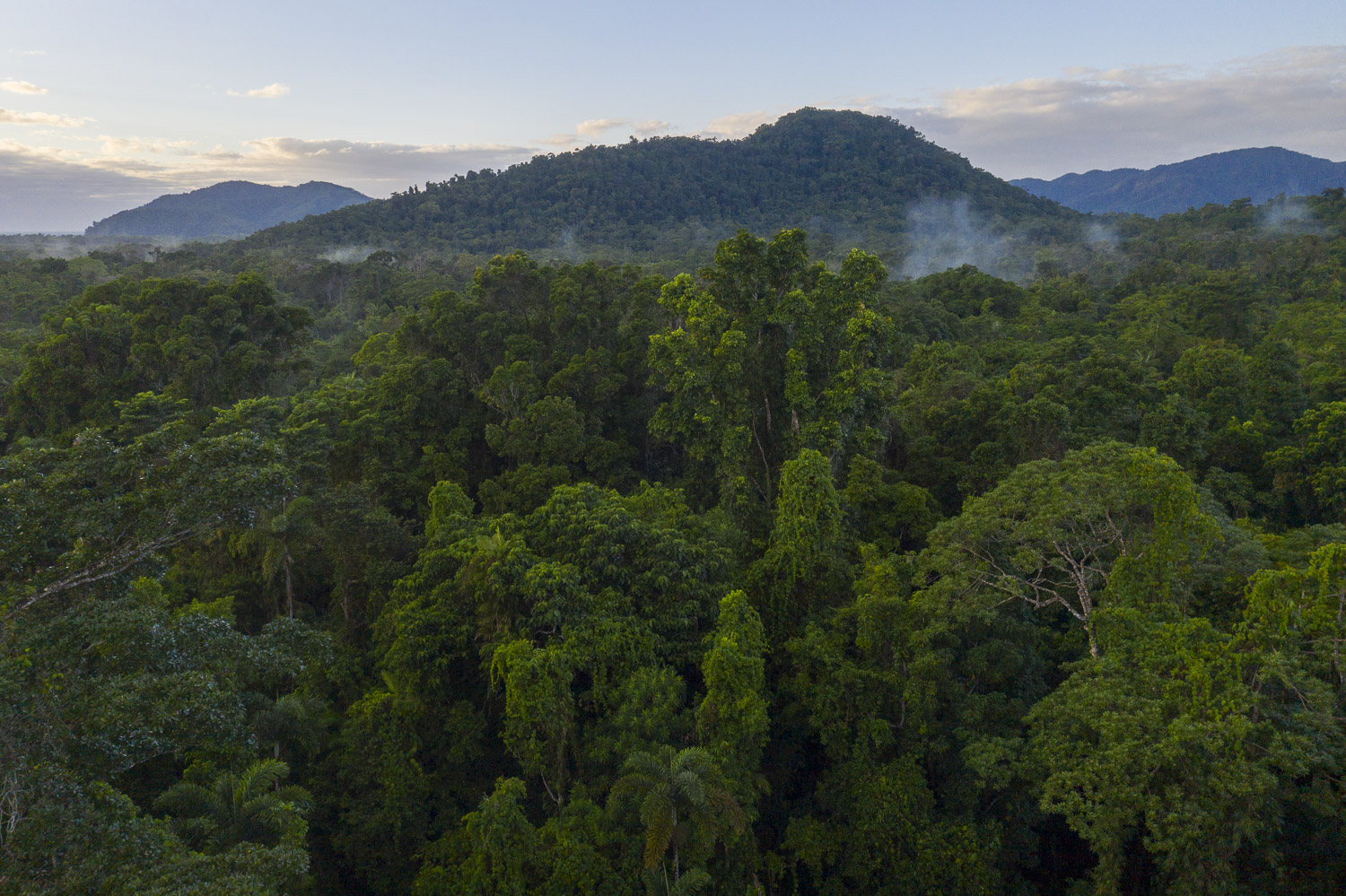 The purchase and protection of land in the Daintree Lowland Rainforest is very significant to Bama (Bama meaning Rainforest Aboriginal people), and Lot 157 has been given the Kuku Yalanji language name of Kurranji (pronounced Guhd-un gee) meaning Cassowary.

Kupa Teao - CEO of the Jabalbina Yalanji Aboriginal Corporation said “the buyback of land is supporting Bama to get back on country, to allow them to be reconnected to country, and supporting the Traditional Owners and Elders to be part of that process.”

Located at Diwan in the heart of the Daintree Lowland Rainforest – the oldest living rainforest on Earth - Lot 157 is home to the endangered Southern Cassowary. The rare Bennett’s Tree-Kangaroo found here now also has a secure home.

Before choosing to secure this property for conservation the Rainforest 4 Foundation engaged ecologist Kristopher Kupsch to undertake a survey. More than 270 native plants were identified and this included 12 plant species listed in the Queensland Nature Conservation Act. 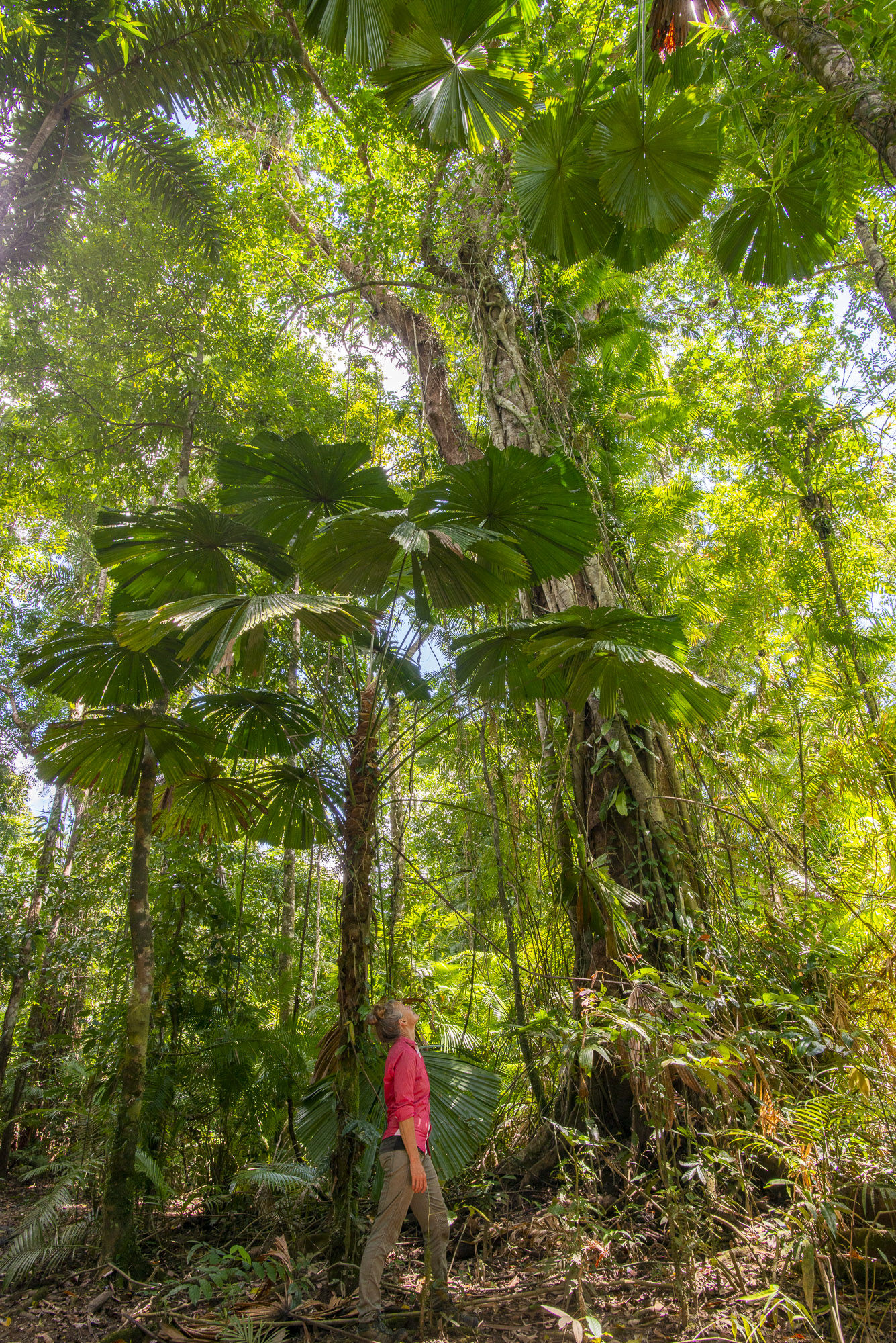 On the property, there are many very large trees reaching 35 meters tall with impressive buttress roots. The trees are festooned with epiphytes being ferns and orchids with large lianas and other vines cascading from above. The Spur Mahogany tree (Dysoxylum pettigrewianum) and Fan Palm (Licuala ramsayi) is a characteristic feature of these rainforests. There are also numerous endemic plants with their distribution restricted to the rainforests of the Daintree lowlands.

Many large specimens of Hopes Cycad (Lepidozamia hopei) occur on Lot 157. This species of Cycad is the largest growing in the world and has evolutionary links dating back some 200 million years. 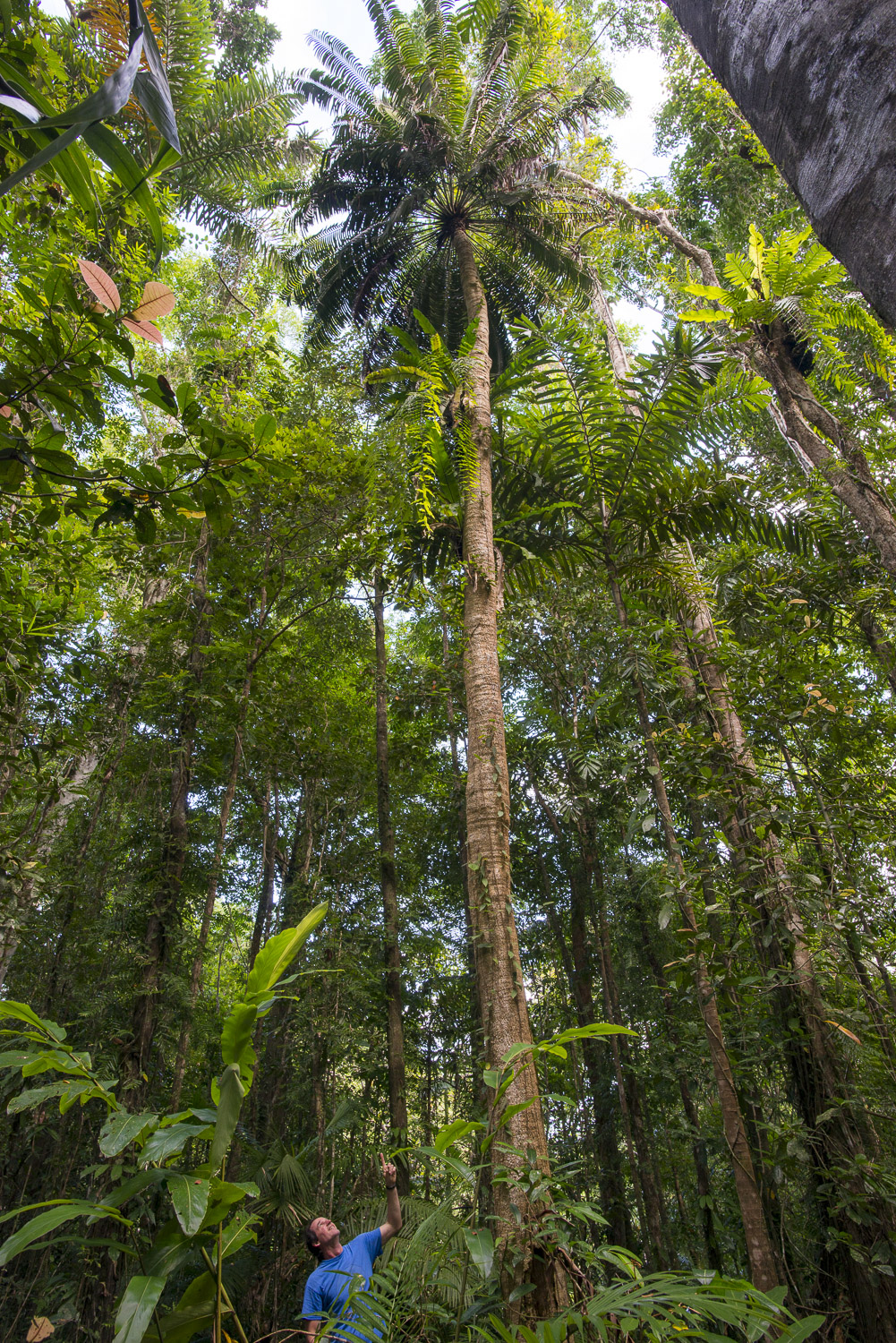 An ancient Hopes Cycad estimated to be over 2,000 years old.

“The important contributions of ecologist Kristopher Kupsch means our efforts are underpinned by science and the photography of Steven Nowakowski has documented the threatened species of flora and helps tell the story of this precious rainforest,” Kelvin said.

Over six months James Stanton-Cooke aka “Jimmy Halfcut” inspired a passionate group of ‘Half Cut’ supporters to help fundraising efforts. Jimmy and his friends have raised more than $97,436 for the purchase of Lot 157.

“Saving Lot 157 is another fantastic outcome for the conservation of the Daintree Rainforest,” said Jimmy. “Working in partnership means with Rainforest 4 Foundation means we can achieve our goals much quicker than working alone. In the race to save the Daintree, the collaboration between Rainforest 4 Foundation, Jabalbina Yalanji Aboriginal Corporation, and HalfCut is producing the results. It is an exciting time for conservation, as our joint efforts and the contributions of our supporters are protecting multiple properties with many more to come. What we have shown by working together many more properties can be saved. 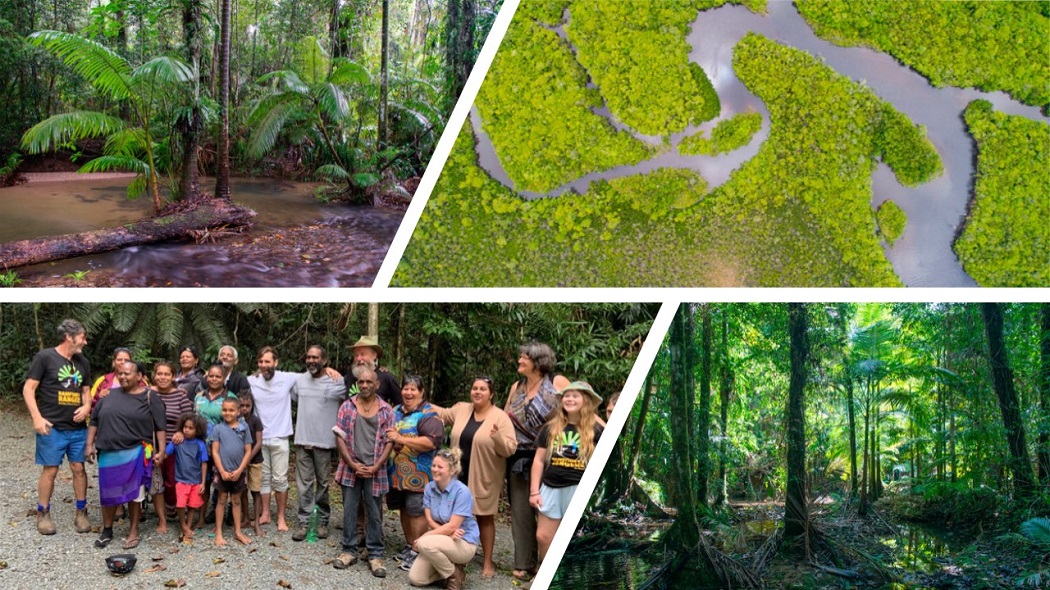 A Gold Coast based arts organisation also activated its network to raise $14,620 towards purchasing Lot 157.

Chloe Popa, the Managing Director of Blank Street Press said that “while the Daintree is a long way from the Gold Coast, the number of supporters proves it’s an issue people are prepared to open their wallets for.”

“We can’t always wait for governments to take action,” Chloe said. Over 230 everyday people donated through the Chuffed campaign.”

“We’re stoked that the Gold Coast arts community can see that preserving the Earth’s rainforests is critical in halting runaway climate change and protecting our biodiversity,” she said.

Kelvin said that while the purchase of Lot 157 is a huge milestone for the organisation, there is more work to do.

“Lot 157 is the eighth property we’ve purchased in the Daintree Lowland Rainforest,” he said. “But our recent trips into the rainforest have shown how very real and urgent the threat to other blocks is. We have identified 207 undeveloped freehold properties that need to be purchased and added to the Daintree National Park”.

A recent rise in Daintree property prices following COVID-19 means we are in a race against time and those that would develop the oldest rainforest on Earth for rural residential housing.

In response, the Rainforest 4 Foundation has identified several other properties that urgently need to be purchased and protected in the coming months and we will be launching this appeal shortly. These properties will be part of a much larger campaign to purchase and protect multiple properties by the end of this financial year.