Regional Ecosystem 7.3.10a is listed as “Of Concern” under the Vegetation Management Act 1999.

Fundraising for this property was achieved on the 11th of March 2022. Settlement on the purchase is scheduled for April 2022.

Thank you to all the generous donors. 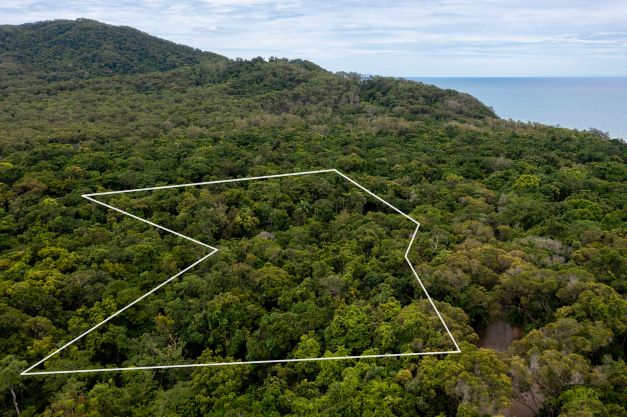 We purchased Lot 257 Silver Ash Road in Cow Bay to fulfill our vision for the conservation of the Daintree Lowland Rainforest. This requires the buyback of all undeveloped freehold properties in the Daintree Lowland Rainforest. Not only do we want to see no further development, but we also want the negative impacts of the rural residential subdivision to be reversed. Lot 257 Silver Ash Road is located between two isolated areas of the Daintree National Park and the purchase of this property has linked them up.

In 1982 the Queensland government approved a 1,136-lot rural residential subdivision in the Daintree. This resulted in two-thirds of the Daintree Lowland Rainforest being excluded from protection in the Daintree National Park and Wet Tropics World Heritage Area that was declared in 1988. Lot 257 Silver Ash Road is one of these properties. 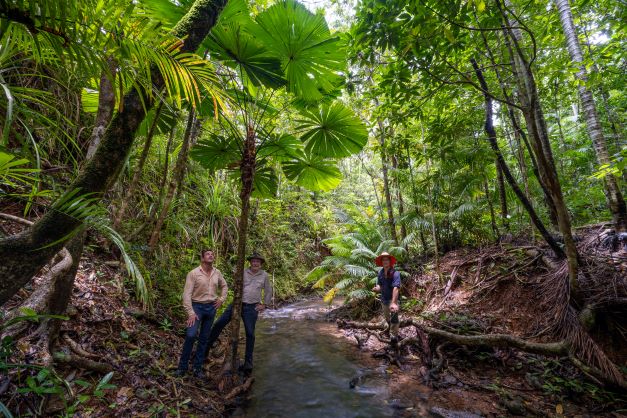 Beautiful rainforest and creek on Lot 257

Before we make a commitment to purchase a Daintree Rainforest property for conservation we have ecologists undertake a comprehensive survey to confirm the conservation values.

A vegetation survey undertaken on the 16th of November 2021 identified 258 native plant species including three plant species listed on the Queensland Nature Conservation Act 1992. There are also 4 endemic plant species that have their distribution largely restricted to the Daintree lowlands.

Other plants of importance on Lot 257 include the Hope’s Cycad (Lepidozamia hopei). This species of Cycad is the largest growing in the world and was once utilised by Aboriginal people as a food source. It has evolutionary links dating back some 200 million years and along with other ancient species form some of the reasons why the Wet Tropics World Heritage area has been afforded protection within the National Parks estate. 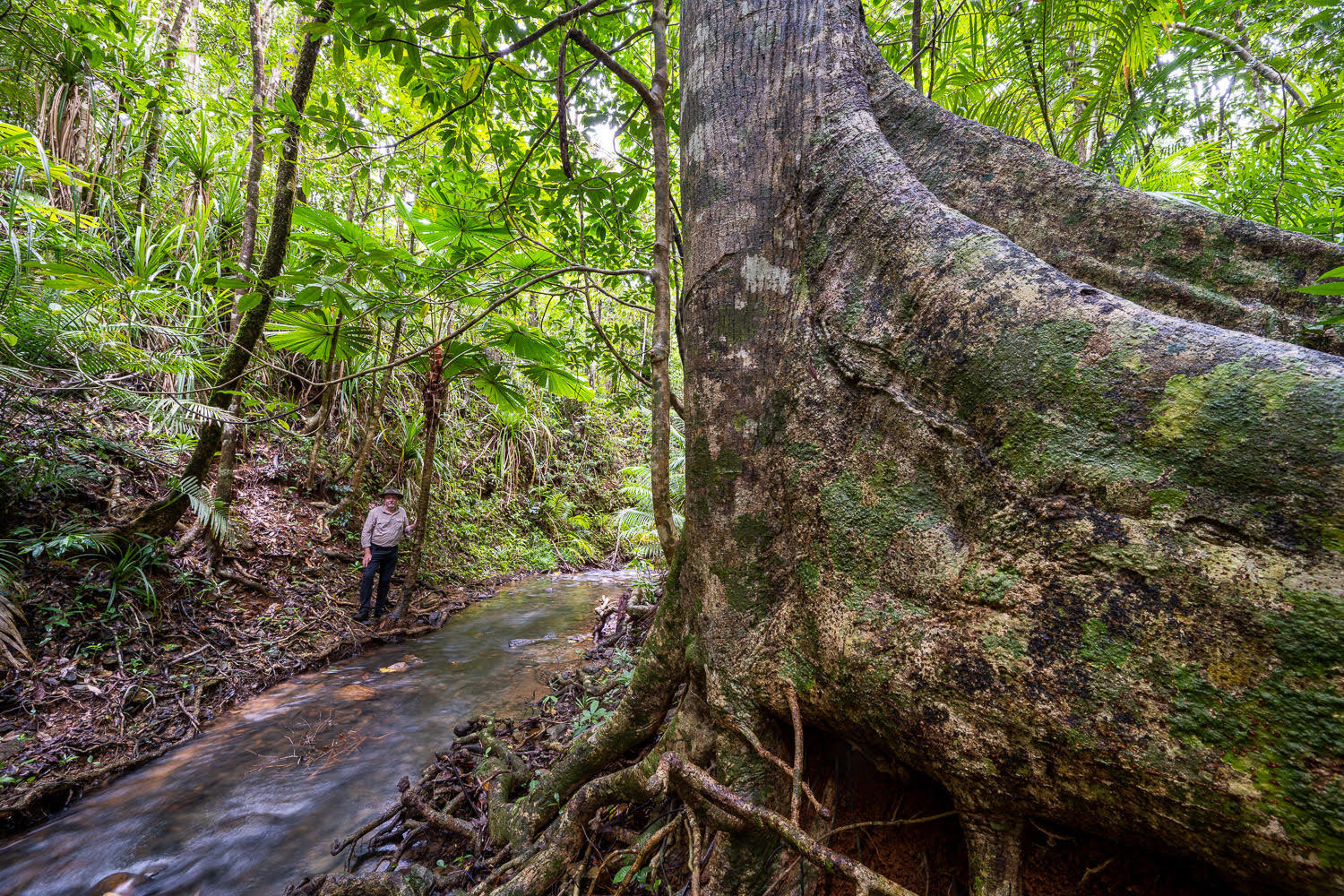 One of many large trees on Lot 257 Silver Ash Road 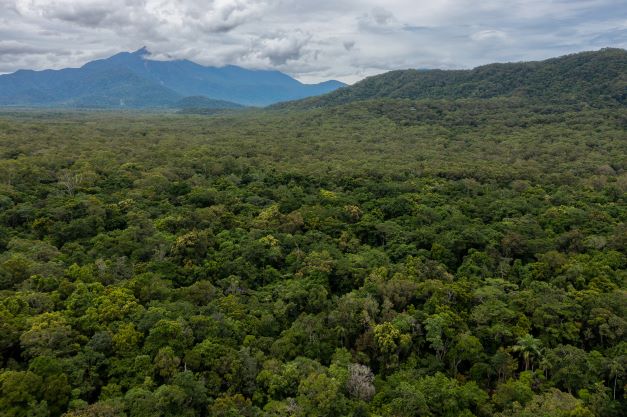 The Daintree Lowland Rainforest is one of the oldest rainforests on Earth and provides a refuge for wildlife and ancient flowering plants. It holds exceptionally high biodiversity and conservation value and is the largest continuous area of tropical rainforest remaining in Australia. With almost 200 undeveloped properties remaining in private ownership, the future of the Daintree is yet to be determined. Will it be increased development and urbanisation, or will it be the winding back of the disastrous subdivision to save the Daintree Rainforest. 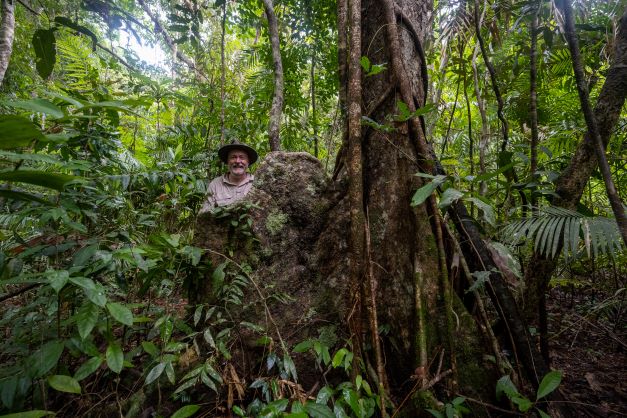 This project to purchase and protect land in the Daintree Lowland Rainforest is a partnership involving the Rainforest 4 Foundation, Jabalbina Yalanji Aboriginal Corporation, and fellow non-profit HalfCut.

Thanks to HalfCut and their wonderful supporters. The fundraising success of HalfCut has enabled us to purchase multiple properties in the Daintree Lowland Rainforest.

In 1982 the Queensland government approved an 1,136-lot rural residential subdivision in the Daintree. This resulted in two-thirds of the Daintree Lowland Rainforest being excluded from protection in the Daintree National Park and Wet Tropics World Heritage Area that was declared in 1988. The development that followed has resulted in fragmentation of the rainforest with the construction of roads and the building of hundreds of houses. Settlement has introduced exotic plants that have become weeds and domestic dogs and traffic that are a threat to wildlife. Because the land in question is in private ownership, the only option to resolve the issue has been the purchase and protection of additional lands to expand Daintree National Park.